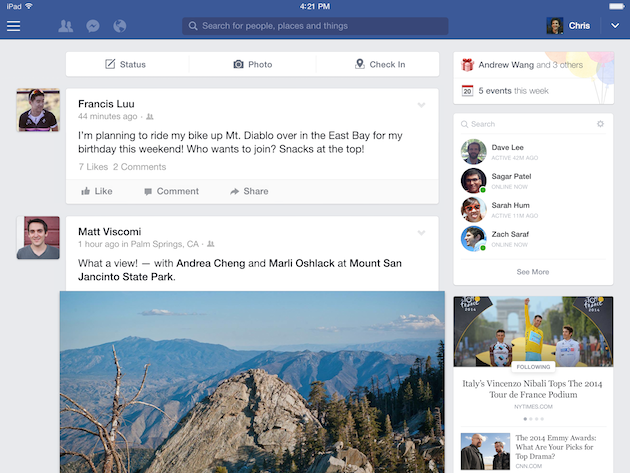 Facebook is primarily used to check on how your friends are doing and also to share with them your thoughts and pictures. But the world's biggest social network has evolved into something bigger than just that. Besides the traditional social features, many of us use Facebook for catching up with the news and casual gaming.

So to make sure that its users keep doing these things, Facebook has updated its iPad app with a new right-hand column that highlights news and games and other areas of interest relevant to users. At the moment, the feature only appears in landscape mode and it could stay like that, because it won't have room to expand in portrait mode.

Facebook is also introducing a new sidebar module called Trending Articles, which surfaces articles from sources that are relevant to users. The folks over at Engadget had a chance to play around with an early demo of the updated app and here's their impression:

We had a chance to take a look at an early demo of the updated app, and the Trending Articles section looks almost like a miniaturized news portal. It consists of four different sections, which you can switch between by swiping left or right. In the example we saw, one section displayed articles from the New York Times, another from Buzzfeed and another from NPR. The fourth section showed stories about the Pittsburgh Steelers, with the articles coming from different news sources. Of course, the articles you see will be different depending on your own interests and preferences.
Click to expand...

Chris Struhar, the product manager for Facebook for iPad, said the following:

"It's showing articles that are popular over the past day or so. Ideally every day you're going to come to this and see a fresh batch of content. We try to rank them and find ones that you engage with most."

At the moment, however, the official update hasn't yet made its way into the iTunes Store, but this will happen in the following days.

Source: Engadget
You must log in or register to reply here.