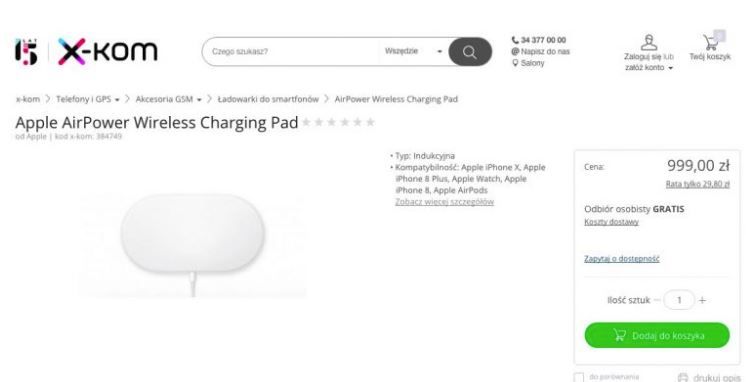 While Apple’s forthcoming AirPower charging mat is not due to launch until 2018, a Polish website, X-Kom, may just have leaked details about the mat’s pricing, writes AppleInsider. According to Polish news site ThinkApple, which originally spotted the possible leak, the Polish retailer’s website is listing the AirPower mat for 999 zlotys, which is the equivalent of $273.99, which the website thinks will end up being around $199 in the US. According to MacRumors, the thinking behind this figure is that other Apple products that have been priced at 999 zlotys in the official Apple store in Poland, such as the Bose SoundLink speaker, for example, end up costing $199 in the US.

Of course that’s no guarantee whatsoever that the AirPower mat, which charges up to three devices at once, will end up costing $199, especially as it does seem rather expensive at that price, and, as AppleInsider points out, even more expensive than Apple’s AirPods, which cost $159. With no release date for the charging mat set as yet, it will likely be some while before we find out for sure.

Apple's Upcoming AirPower Wireless Charging Mat Could Cost Around $199 in the United States
You must log in or register to reply here.

M
AirPower Wireless Charging Mat Could be Here By March