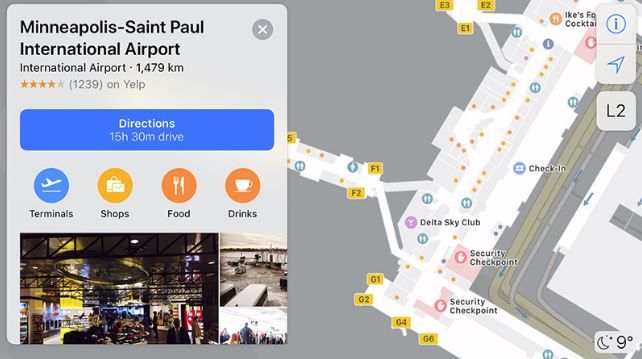 MacRumors reports today that Apple has continued to expand one of the most popular features of its Maps app by adding indoor maps for eight more airports in the United States.

Now when you search for the above-mentioned airports on Apple Maps, you can select “Look Inside” or just zoom in to see the terminals, boarding gates, security gates, check-in desks, baggage claim area, info kiosks, restrooms, shops, restaurants, parking garages, as well as stairs, elevators, and escalators, among other things.

The new feature is so detailed that you can even browse floor-by-floor, or look for specific shops or other amenities in a specific terminal. And even better than that, another incredibly useful aspect of the indoor maps is that when you tap on the name of a restaurant you will see more details and photos about the restaurant, including opening hours.

Presumably more airports will be added soon in the US and then worldwide.

That’s so cool.
You must log in or register to reply here.

Google Maps 2.0 has been released for iOS adding iPad support