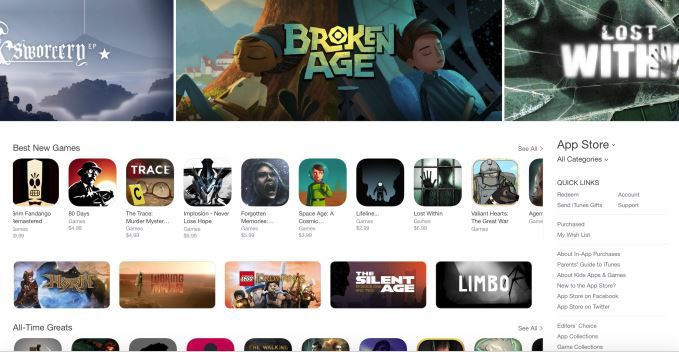 Tech Crunch reports that Apple has made several changes to the way in which apps are organized and featured in the App Store. Apple has quietly got rid of some of the algorithmically generated lists that highlighted new and popular titles, such as the “New,” “What’s Hot,” and “All iPhone (Free & Paid).”

Instead, editorially curated lists are now the focal point, being introduced for the first time ever in the Games apps section.

Tech Crunch says that the “All iPhone (Free & Paid)” section was most likely removed due to the practice of some app developers giving their games titles beginning with “AAA” so that their apps could appear first on the list.

The new categories now featured in the App Store include “Best New Games” and “All-Time Greats,” which are all compiled by Apple editors and refreshed weekly.

Tech Crunch reports that some app developers have seen big drops in organic downloads since the changes, ranging from 30 percent to 90 percent for some in the first week after launch. Some developers have even said that their launch-day numbers fell from 1,000 downloads per day to 100.

While this could be bad news for some developers, especially those experiencing such drops, as Tech Crunch points out, this could mean that developers who make quality games will be highlighted, and developers who make rip-off games such as thinly veiled Flappy Bird clones will find their apps are getting lost in the shuffle, as they are much less likely to be chosen by the App Store curators.

Source: http://techcrunch.com/2015/06/01/ap...on-with-increased-focus-on-editorial-content/
You must log in or register to reply here.

Apple App Store Sets New Record; Sells Over $500 Million Worth of Apps in a Week