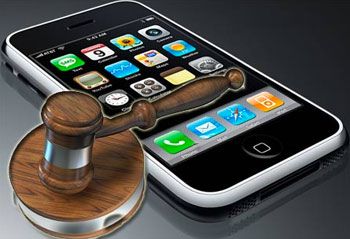 Apple is in the news again with another lawsuit but this time on the opposite side. Elan Microelectronics filed a lawsuit against Apple with the U.S. International Trade Commission on March 30th, 2010. According to PCWorld, the lawsuit deals with the use of multiple fingers on a touch screen device â€” in other words, multitouch â€” and looks to prevent the import of any Apple multitouch product into the United States, including the iPad, iPhone, iPod touch, MacBook and Magic Mouse.

The lawsuit is similar to one that Elan filed against Apple with the U.S. District Court last year, but in a different venue. In the District Court case, Elan seeks triple damages and a â€œreasonable royalty,â€ but the ITC's power is limited to injunctions, arguably a more severe penalty than monetary damages. As GigaOM points out, Elan is exploiting a loophole that essentially lets firms sue twice on a single patent. Apple used the same tactics its patent lawsuit against HTC, filing with both the ITC and the U.S. District Court.

[Source: www.PCWorld.com]
You must log in or register to reply here.

Valencell, a Biometric Sensor Company, Accuses Apple of Stealing Their Tech for Use in Apple Watch

M
Qualcomm Wants iPhone and iPad Imports Banned in US