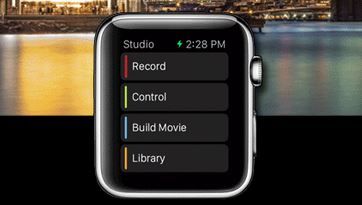 Slash Gear gives a great write-up today on the new Vizzywig 8HD Apple Watch app, which enables you to control your 4K, HD, and GoPro recording at a distance. It can also connect up to 24 iOS and Android devices, and can even record simultaneously from a GoPro and an iPhone. You can also use the app to switch between cameras.

The app lets you view recorded footage and photos from your gallery, GoPro, or Dropbox albums with just a tap on the watch. You can even choose a soundtrack for the video, dictate a title and subtitle, all from your wrist.

However, such convenience doesn’t come cheap, with the Vizzywig 8HD Apple Watch app costing $99.99, and that’s aside from the cost of the Apple Watch and iPhone, of course. Also you have to factor in the cost of multiple iPhones, Android phones or GoPro cameras if you choose to use a lot of extra devices in your video production.

Source: Vizzywig 8HD turns your Apple Watch into a recording control room - SlashGear
You must log in or register to reply here.