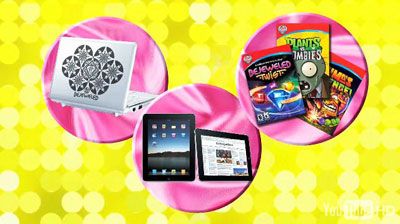 PopCap Games has today announced the launch of its â€œShow Your Bejeweled Loveâ€ contest as part of the gameâ€™s 10th anniversary celebrations. The contest, which starts today and ends on May 26th, is open to residents of the US, Canada (except Quebec), and the UK.

Participants must submit a YouTube video which illustrates their devotion to Bejeweled in two minutes or less. Submissions can be as weird and wacky or as fun and fanatical as you like. Prizes worth $5,000 in total will be awarded to the top 10 entries, including two iPads which have each been emblazoned with custom-designed â€œBejeweled 10th Anniversaryâ€ engravings, and a limited edition notebook PC. Hereâ€™s Jason Kapalka, co-founder and Chief Creative Officer at PopCap and co-creator of Bejeweld, talking about the competition:

â€œMore than half-a-billion people worldwide have played Bejeweled over the past decade, which still blows our minds. Their enthusiasm for the game is unquestioned, and we thought it would be fun to reward that incredible devotion in some way.â€

The entries will be judged by members of PopCapâ€™s art and game design teams, and will be base on the following criteria: enthusiasm, presentation, and knowledge of Bejeweled. The best entries will be posted on the site throughout the duration of the contest. You can find out more about the competition, including the official submission form, at Bejeweled.com - Official site for Bejeweled - the world's #1 puzzle game..

Check out the video after the jump!
By Maura Sutton, iPadForums.net
OP

[ame=http://www.youtube.com/watch?v=ebj0AYoGN-E]YouTube - Show Your Bejeweled Love Contest[/ame]
You must log in or register to reply here.