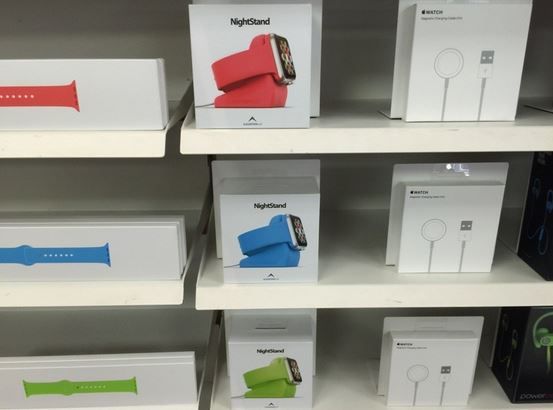 MacRumors notes that NightStand is one of only a few Apple Watch stands that support watchOS 2’s forthcoming Nightstand Mode, which enables the Apple Watch to be used as an alarm clock while it charges.

MacRumors says that it heard from a source that NightStand is the only Apple Watch accessory currently available in Apple’s retail stores, but expect more accessories to arrive in September.

MacRumors notes that Apple has also made some other changes to its retail stores today, switching out the old iPad smart signs for special “pricing apps” on each item on display.

Source: Apple Starts Selling Third-Party Apple Watch Accessories in Retail Stores
You must log in or register to reply here.

Apple has Started Advertising the Apple Watch in its Retail Stores

Apple Watch to be Available at More than 100 Best Buy Stores in the U.S. on Aug. 7