The Future Is The Past

Senior high school students from across Canada have been in Ottawa this week, preparing to go overseas to mark the 95th anniversary of the Battle of Vimy Ridge, during the First World War.

I took this picture of them this morning, at the National War Memorial monument in Ottawa, Canada's capital. In the upper left quarter of the snap, Parliament Hill is visible.

The brief ceremony was quite moving, knowing that some of the youngsters taking part are at the age many of soldiers were when they left Canada, to join the war effort in Europe, generations ago. 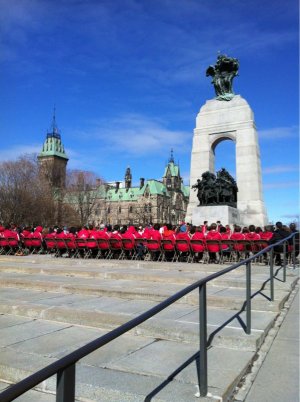