I am looking forward to the ipad and ibooks. I am not only interested in the books there but would love to get my magazines there as well. It would be great if they allowed my subscription to be by mail or electronic. I have no room for my old magazines and they just get thrown away or recycled. I would like to have a data base on my mags that I can go back and review again later. They would take advantage of the color screen and put a big ding into the Kindle. My wife and daughter got a Kindle for Christmas and they both love them. My wife told me the other day that she went back to read a book and missed her Kindle. Well if itunes can start with music and go to movies and TV shows than anything is possible.
I

I think this will all be determined by a snowball affect. If some major publishers get on board (magazine publishers that is) early and it shows that it's paying off for them, more and more will join.
M

As long as Apple doesn't get too greedy they'll come. The potential for increased readership on the iPad platform will be limited for a while, so incremental revenues for publishers will also be limited. If Apple want to take too big a chunk of that then publishers might not bother.

I guess the magazines will be assessing where they'll make the most money. Go with an iTunes solution and pay a chunk of cash to Apple, or do their own and have their own e-subscriptions on the web (and keep it all).

I suspect they'll do both. They'll do their own versions in Flash (with much better reading software than currently exists today) that has huge penetration across big screen portable devices (i.e. laptops, netbooks, etc). And rather than go to the expense of creating a separate version for Mobile Safari (that is likely to have a relatively tiny penetration for at least the next year or so - at least for devices with a magazine friendly screen i.e. not an iPhone/iPod Touch), that will struggle to work on IE they'll sign up for iTunes in order to cover 100% of the market. Because magazines need circulation, which is all about market penetration.
Last edited: Feb 11, 2010

Content is king. Magazines on the iPad will be very cool. Time Warner is working on publishing some of thier magazines like Sports Illustrated for tablets. They haven't said as far as I know they will support the iPad but what a mistake if they don't.

A quick look at how Sports Illustrated might look on the iPad.
A

Yea right, at least SI has the swimsuit models and with iPad in video form, whats NYT have?

My next question what will SI suggest as a subscription price for their iPad app?

Let's hope many of these content providers fall in the $5/m category and also add HTML5 support, just so I don't have to see this... 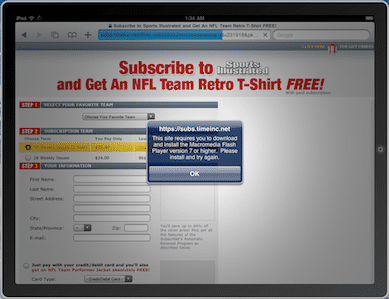 There is an application for Mac OS X called Calibre which is available for free download. While it is primarily an ebook library app it also has more than 150 "formulas" with which it can download various newspapers, magazines and blogs for free! On my Kindle 2 (now quaking in e-ink fear of the iPad) I never, ever, ever pay Amazon's crazy prices but just use Calibre to get the downloads. Calibre can convert any of its stored ebooks in the EPUB format which I think that the iPad will be using. Will you be able to upload ebooks in EPub form to the iPad, dunno. But in that case you could use iPhone apps Stanza or PDF Reader which would allow you to transfer either mobi or pdf files to the iPad from Calibre -- either ebooks or the downloaded magazines.
You must log in or register to reply here.