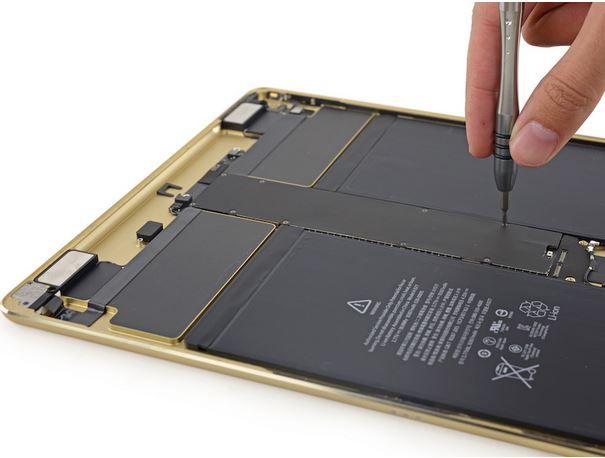 MacRumors reports that as you might expect, no sooner has the iPad Pro been released than iFixit has wasted no time in getting its hands dirty and taking the thing apart bit by bit and then tereporting on its findings.

Apparently, while much of the tablet’s internal workings are very similar to those of the iPad Air 2, there are some new and noteworthy components, such as the new four-speaker audio system, for example.

A speaker driver is situated in each of the four corners of the iPad Pro, next to a capped resonance chamber. The speakers are all identical, with the iPad Pro altering the function of each speaker depending on the orientation of the tablet. The two speakers that are in the top position are for higher frequencies, while the speakers on the bottom are for lower frequencies.

Having uncapped the volume chambers to the speakers, iFixit found that they give the iPad Pro speakers 61% more “back volume” than older iPads. iFixit also found, however, that the new speaker system takes up a fair amount of space, so much so in fact that the same amount of space could have been used to house a 50% bigger battery.

Another change noticed by iFixit is that the iPad Pro’s logic board is in the center of the tablet, unlike in previous iPads where it is situated to the side.

Also, the teardown has revealed that the iPad Pro has a 10307 mAh battery.

And, finally, iFixit has only given the iPad Pro a repairability score of 3 out of 10, saying that large amount of adhesive used to hold all the parts together means that it would be difficult to replace parts.

Source: iFixit Teardown Reveals iPad Pro's Four-Speaker Design Fills Space That Could Have Held 50% More Battery
You must log in or register to reply here.