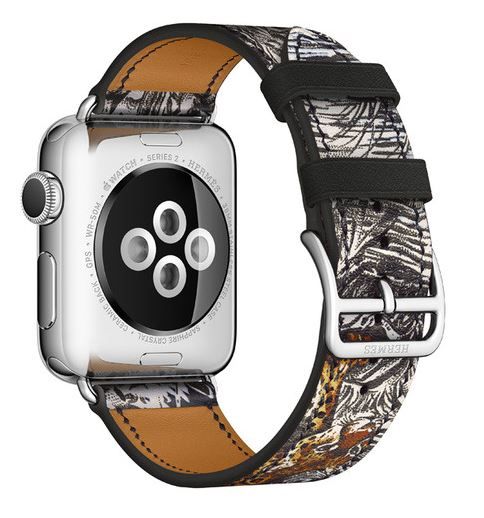 AppleInsider reports that Hermès is launching a very exclusive new Apple Watch band today. The Équateur Tatouage (Ecuador Tattoo) has been designed by Robert Dallet, and will only be available in limited numbers directly from Hermès stores.

The printed calfskin band is based on the Single Tour band that is already on sale for the Apple Watch, but with a new jungle print design featuring a tattoo-style jaguar design.

As you might expect, such a premium piece comes at a premium price, and the Équateur Tatouage will set you back €419 ($442), which is a lot more than the Single Tour, which costs €349 ($368), overtaking it as one of the most expensive Apple Watch bands available.

Despite the fashionable appeal of the Apple Watch, Hermès is currently the only fashion brand that Apple has partnered with in terms of band designs, as well as the Hermès Apple Watch variant, which is the result of “a partnership based on parallel thinking, singular vision, and mutual regard,” according to the Hermès website.

Sources: Hermes to launch new exclusive Apple Watch band on Nov. 24
You must log in or register to reply here.