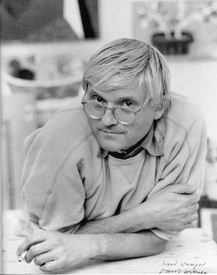 According to this great feature on Bloomberg.com, artist and legend David Hockney is a huge fan of the iPad, and has already started using it to make art. â€œI have got an iPad, what a joy! Van Gogh would have loved it, and he could have written his letters on it as well,â€ Hockney texted the author of the feature, Bloombergâ€™s chief art critic, Martin Gayford. In the article Hockney reveals that he was already a huge fan of the iPhone, but says that the iPadâ€™s larger screen takes his iPhone art to â€œa new level.â€

Hockney had previously used his iPhone to produce hundreds of drawings that he liked to send to his friends for free. Now, instead of using just one finger to draw the bouquets of flowers that he likes to send to his friends every morning, he can use all of his fingers to draw much more complex pieces. Hockney says that drawing in this way is even easier than using a real pencil or brush â€“ â€œI can change colour or the width of the mark very rapidly on this, quicker than with an ordinary computer.â€

Hockney also likes the fact that the iPad and iPhone are luminous, reflecting light in the same way that a stained-glass window or a mosaic might, and that motivates him to choose luminous subjects and themes, such as sunrises, or flower vases with water in them that catch the light. He also finds that the iPad can reproduce every move that he makes in rather flamboyant style â€“ â€œIâ€™ve realised that I can do performances.â€

I think I just found my first wallpaper! Now, how do I get it fon the ipad? I'll try to figure it out when my 3g arrives!
T

Lederman said:
I think I just found my first wallpaper! Now, how do I get it fon the ipad? I'll try to figure it out when my 3g arrives!
Click to expand...

the drawing/image in that link looks rather small, but I'm sure a larger version to use as wallpaper must be available online somewhere
A

iPhone, iPad, ipod and some of other digital products of Apple company are walking into people’s life gradually and plays a significant roles in our daily life. Even though there some unavoidable limitation, but we should believe iPad is striving to change everything, we are looking forward!

yeah we should be very delighted to see more nice stuffs have come out! i am so excited to see that!
C

there are a large number of people are fans of ipad, me too.
You must log in or register to reply here.