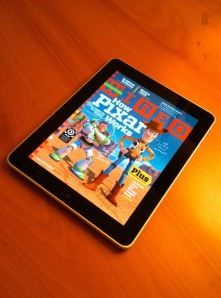 Wired.comâ€™s Epicenter blog reports today that Wired sold 24,000 copies of its iPad app in the first 24 hours since Tuesday night when it was made available for download in Appleâ€™s iPad App store. This was after Business Insider had estimated that Wired would probably only sell around 3,000 copies on its first day.

Conde Nast , Wiredâ€™s publishers, have said that they plan many more innovative features in the next few months, as part of a continuing development process. As Epicenter points out, the real proof of the pudding for new magazine apps is whether they can sustain the interest of their readership after the initial novelty factor has worn off. They also need to sort out some decent subscription packages that are attractive enough to encourage customers to sign up for the long term. Currently you can only buy individual copies of the Wired iPad app for $5.00, which is the same as the cover price of the print version.

Wow, maybe they'll have to do a reprint, lol Kind of puts GQs sales of (I think) 365 into perspective though, doesn't it?

I of course disagree with the pricing... but good for them... the more publishing successes, the more others will publish to the iPad... and that's good for everyone.
M

I can't imagine using 500mb for a magazine. Especially for those with 16GB iPads.

Matth3w said:
I can't imagine using 500mb for a magazine. Especially for those with 16GB iPads.
Click to expand...

petermillard said:
Wow, maybe they'll have to do a reprint, lol Kind of puts GQs sales of (I think) 365 into perspective though, doesn't it?

petermillard said:
Wow, maybe they'll have to do a reprint, lol Kind of puts GQs sales of (I think) 365 into perspective though, doesn't it?

Hey, I read them both!

But I only paid for the Wired app because the GQ App got really horrible reviews like "thinly veiled PDF in app form" and some were not so nice.

I'll stick to paper GQ until they figure out the internets.
B

Yea i just got it, its pretty cool
S

Anybody know if other additions will be cheaper? I know the initial app cost alot and it included the June issue....will upcoming issues be the same price or will they be cheaper? I purchased the app to show support for digital mags in general, but I wont buy another if it is the same price.
T

WIRED has been one of my favorite magazines for many years, they deserve every bit of success they have!!
G

ipadbuzzblog said:
WIRED has been one of my favorite magazines for many years, they deserve every bit of success they have!!
Click to expand...

I'm not surprised by the numbers, just hope they keep cranking out great content.
You must log in or register to reply here.

M
Wired On iPad Free For A Month