Will Siri make it to iPad?

I don't have an iPhone 4S but have seen Siri being used on it. I think Apple needs to put it on the iPad. I thought all Apple mobile devices from the Touch on up, used the same iOS. But the iPhone 4S must have its own iOS since it has Siri. Also, wouldn't Siri be useful on the Mac too?

Siri needs special features to make it work properly. The 4S has two microphones. One at the mouth that is designed to get the clearest sounds spoken, another at the ear to distinquish the background noise to sort it out. That is why Siri is not considered backward compatible even though people have jail broke devices to use it. The iPad would benefit from Siri, but it would need to use a noise cancellation headset to work properly. If Apple is willing to go that route, it may happen, but it could also mean that Apple would sell it as an accessory/app with the headset. Siri on a Mac is not likely to happen. It is designed to work with a GPS system on a mobile device. No GPS on a Mac, nor any need for one. Unlike a mobile device, there is no need for a computer to have voice control since typing is not an issue. What would be more likely to be of use on a Mac, is a search engine that you could type a question and not get a bunch of unrelated garbage from sales people using buzz words.
OP
S

Thanks for that. It clears up alot.

I found this the other day 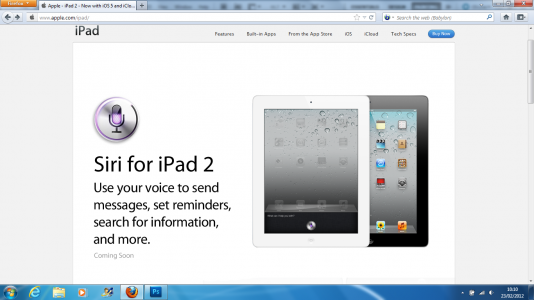 Actually the reason for siri only on the iPhone 4s is due to the fact that it needs a special EarSmart chip that handles the noise cancelation. iPhone 4 has noise cancelation, but not the EarSmart Chip that siri needs to hear you clearly.

apple surely will just include this EarSmart chip in new models they roll out, and the company behind the EarSmart chip is now allowing for the technology to be integrated into processors. This means apple could simply start adding it to their new processing chip and save the space of having another physical chip in the device.

Id be surprised of they didnt include it honestly

Sent from my DROID2 GLOBAL using Tapatalk
You must log in or register to reply here.

Siri Ported To The iPhone 4, Most Likely Illegal