Hi, before I begin I should probably say I am an ipad 2 user and an iphone 4 user. Though I do not own a mac. I'm still fairly new to the apple world

Each year I help to organise a convention (which is admittedly a very geeky affair) and this year I'm thinking of using an ipad to help out with the various jobs.

For instance, I have designed the convention's floorplan using an online website which has it's own ipad app - so I can show our volunteers where I need all of the funiture placing etc.

Additionally I have lots of jobs which traditionally entail using a lot of paperwork. Now, most of these are "note" based, so that is an easy transition to ipad - an example of this would be auctions and raffles, where it would be useful to make an ipad list of winning bids, in case paper lists are lost.

There is however, one thing which has got me stumped. Each year we hold a costume competition. As we film the competition, we ask everybody to sign a consent form - this is especially important for younger entrants, as we need to be sure their parents consent to them being filmed. In past years, I literally just had a file with 20 forms ready for when the entrants arrived (we try to do it ahead of time online, but there are always extras on the day!).

I guess what I need to do is quickly open up a copy of the consent form (I have drop box), have it signed and then save it under a new name without damaging the original template file - given that I may have to do this 20 times. But having tested this, I can't find a way to make the process quick and I'm genuinely thinking about using paper forms again.

Can anybody make any suggestions?

I'm sure there are lots of options, but GoodReader can do this.

Save the consent form template as a pdf. On your iPad, open it in GoodReader, and use the 'annotate' feature to sign it; you'll get a "first time modifying a file" dialogue that gives you the option to "create an annotated copy" rather than modifying the original. These are saved as e.g. 'Consent Form - annotated.pdf', 'Consent Form - annotated2.pdf' etc... and can be renamed later on with something more relevant if you prefer.

Just some quick ideas...I'm sure there are many more ways to do this...

I would get something like GoodReader...it works with PDFs...then make a PDF version of your form...and make several of them so you can associated one with each person (or save it to a different file each time, but you might overwrite one so think ahead)...then get a stylus...then open your form in GoodReader, then use the annotate PDF function...select the pencil, let them sign on the bottom, save the annotated version, and you're good to go. You can save to dropbox or email them back to yourself later.

That's just one way to do it...there are many other apps for annotation of PDFs....

Dang...I took too long to type!

This is not my idea. This is what we used at our Choir Gala. A part of the festivities included consent forms. The person in charge did it with his iPad2.

Step One. Using the video app on your iPad, have the participant state their name, date of birth--if a minor, have the authorizing adult include their name and relationship to the minor. Have them read into the iPad, their consent form.

Step Two. Using Pages (that is what he used) Have them sign the pages document.

Step Three. File the video with the Pages when you get the chance.

This guy actually had three iPads going. But if you only have twenty participants, then I suppose one iPad will do.

PDF Expert or PDFPen woulds be better choices for this than Goodreader, in my opinion. If you (or a friend) can create editable PDF forms, they would be ideal.

Or you could go with the paper form and then use Scanner Pro (or similar app) to make backup electronic copies on site.

There is an app called PDF Forms in the app store. Does exactly what you want..you can fill-out forms and have people sign them. 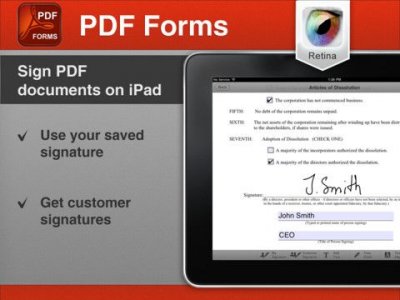 A
How to re-register my iPad to a new user