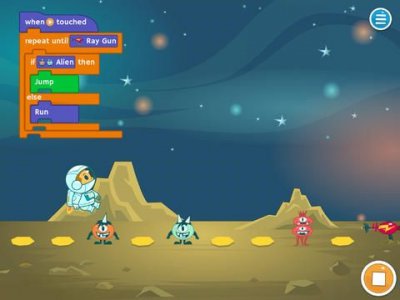 Tynker is a well-known online programming education service and one that is very popular among the younger ones. Now the official iPad app for young students gets released, with stories that will get animated once the young coders will complete a series of programming challenges. This innovative education app can be used by kids who are at least 4 years old.

We are delighted to bring to you the Tynker iPad app to make it easy for kids to learn coding at home, and on the go. The app is a great way for kids with no prior knowledge of programming to learn the basics of logic, and complements our self paced courses and school curriculum.
Click to expand...

The Tynker app hasnâ€™t set a goal for itself of transforming your little one into a coder before he gets into kindergarten, but it rather wants kids to learn about the logic that is used in programming. Think of it as arithmetics on a slightly more evolved level. The first story or programming challenge inside the app is available for free, but ulterior challenges require in-app purchases.

Tynkerâ€™s visual programming language is really simple as it consists in dragging and dropping visual blocks to build a program. The Tynker iPad app contains puzzles that children solve by programming visual code blocks, such as Puppy Adventure, Lost in Space or Sketch Racer. The puzzles will gradually increase in complexity and kids will learn to recognize patterns as they solve them. This app will help improve logic and other skills such as computer drawing and algorithmic thinking skills.

Source: Tynker on iTunes
You must log in or register to reply here.

Z
An exciting educational app for kids from Punflay!