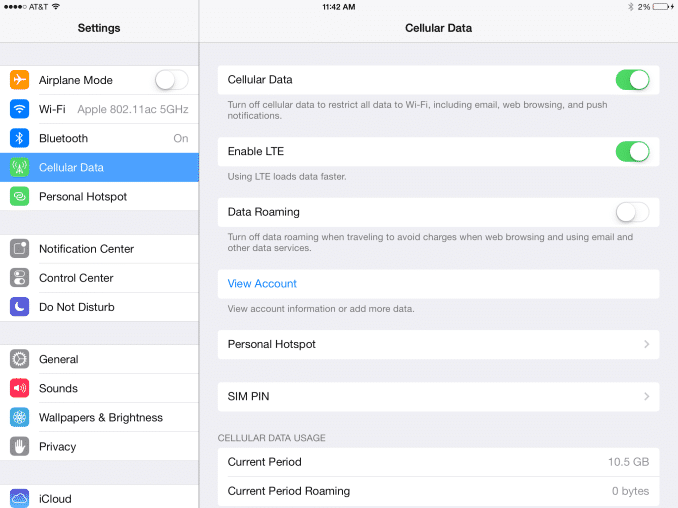 The iPad Air is almost a third lighter than the iPad 4, having a much smaller battery inside (32.4Wh vs. 42.5Wh), but it gets all the same battery life as previous generations. In addition to this and many other features baked inside, the iPad Air with LTE can be the best mobile hotspot ever made.

Anand Lal Shimpi from AnandTech publication wirelessly tethered the iPad Air as a personal hotspot to a 13-inch MacBook Pro with Retina Display and has transferred over 8GB of data. Hereâ€™s what he observed:

â€I set the iPad Air up as a personal hotspot, wirelessly tethering it to a 13-inch MacBook Pro with Retina Display. I started a constant 100KB/s transfer on the MacBook Pro (2x the transfer rate of my iPad 3 test) and with the iPad Air's display off I measured battery life. Last time I chose 50KB/s as it was the average transfer rate across our old WiFi web browsing battery life test, I doubled the workload to be more reflective of more strenuous demands. In reality I'd expect to see a burstier usage profile, but that's something for me to test down the road.â€
Click to expand...

â€A total of 24.08 hours and over 8GB of transfers later, the iPad Air finally died. Just like last time, you'll likely burn through your monthly data allotment before you run out of power.
Click to expand...

James Kendrick from ZDNet also shared his experience using the iPad Air as a personal hotspot for his laptop:

Thatâ€™s why itâ€™s likely the iPad Air could serve as a hotspot for much longer periods due to its 32.4 watt-hour battery. The iPad Air has a much bigger battery to power that bigger Retina Display, but when serving as a hotspot the display is turned off. That should make it possible to run as a hotspot for at least 24 hours, and perhaps much longer than that.
Click to expand...

Thus, we can see that the iPad Air can also reliably be used as an LTE hotspot. And the fact that it comes with an incredible battery life is just an added bonus to all the other great specs it comes with.

Source: AnandTech
Source 2: ZDNet
You must log in or register to reply here.