This doesn't really come under the heading of 'app,' so I'll post a few brief thoughts about this here.

The interface was plug and play. No hassles whatsoever. No noticeable latency. The iPad had no problem powering the interface, and the battery didn't seem to be going down any faster than usual.

I haven't tried it yet with something like Amplitube, nor am I likely to, unless Amplitube will show up as a plugin in Garageband. IK Multimedia wants a few more dinerii to incorporate an 8 track recorder into their program. The amp sims in Garageband are good enough for me to be noodling around on, and are very tweakable.

So, if you guitarists are looking for a cheap way to get your guitar into the iPad, I'd recommend the UCG102.

It also comes with some basic amp sim software for the computer, but I am not going to bother installing it. I have Amplitube 3, and Scuffham amps, so I'm good in that respect. 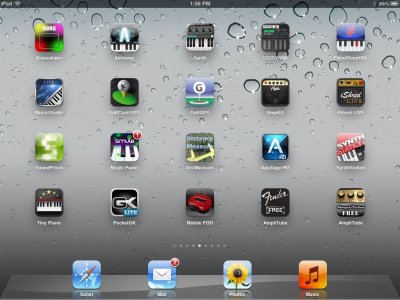 This is just for reference and I don't recommend it.
There is a USB sound card for $3 that has a headphone out and mic in.
It works with the iPad 2 with camera kit connector.
The headphone out is really a line out and does not or can not drive a headphone.
I found the USB sound card failing badly when a headphone was connected.
It may also be the leading reason for bad reviews of the product on amazon.
Also, I thought the sound quality was poor and I was trying to go for the metal tone.

Nice collection of apps! I suppose the only way to know would be to buy one from an online seller that has a 30 day no questions asked return policy. My gut feeling is that it would probably work with Amplitube, or music studio. I, personally, don't see the need to buy those apps for myself, because I don't see myself doing any serious work on the iPad. It would be good for noodling on the go, or as a means to get an idea down quickly, but that's just my opinion, and Garageband is sufficient for either of those needs.
M

I like garage band for some of the neat synth tones for the keyboard. We have our electric piano connected to the apple laptop via a MIDI cable and the basic playing is ok with some latency issue here and there. However, I tried using my electric guitar on the apple laptop garageband and I was getting a lot of feedback noise.
Also I like that there are a bunch of effects. But I liked Digitech multi-effects pedal better sound quality wise, especially Fender amp models. And I thought Marshall crunch tone was not in there.
But I can't complain since garage band does many other things well.
OP
D

I can confirm that the Behringer will work with Amplitube. IK Multimedia was having a sale, and €4.49 seemed a reasonable price to pay for it. I wouldn't have paid full wack for it, though.

I was having trouble with the Behringer for a bit, tried pluging it into my Mac, it worked fine, so it seems that the USB card adaptor I received free when I bought a cover for my iPad is worth about what I paid for it.
You must log in or register to reply here.

iRig and the iPad: Neat device!