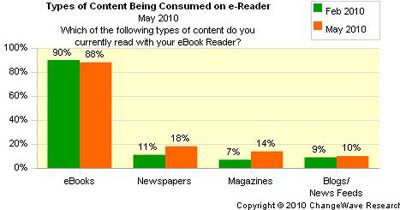 A survey from ChangeWave Research reported on Investor Place has found that consumer demand for the iPad is even greater than the huge pre-launch demand. When ChangeWave surveyed 3,174 customers and asked them how likely they were to buy an iPad, 7% of respondents said â€œVery Likelyâ€, and 13% said â€œSomewhat Likelyâ€, which ChangeWave says is â€œthe highest level of consumer interest weâ€™ve seen to dateâ€. Pre-launch figures for the same question were 4% â€œVery Likelyâ€ and 9% â€œSomewhat Likelyâ€.

The survey also looked at the iPadâ€™s influence on the e-Reader market. 245 respondents who said they owned an e-Reader were asked a series of questions about their e-Reading habits, including what e-Reader they own, and what sort of content they access with their e-Reader. ChangeWave says that the responses indicate that usage of e-Readers has surged since the release of the iPad.

The survey also canvassed 153 new iPad owners and found that most of them feel that their iPad has lived up to its pre-launch promises, with 74% saying that theyâ€™re â€œVery Satisfiedâ€ with their iPad, and a further 17% saying that theyâ€™re â€œSomewhat Satisfiedâ€.
â€œThe iPad ratings are nearly identical to the highest -rated Smart Phone among customers â€“ the Apple iPhone. But we note that Apple has now reached these nosebleed levels with a brand new productâ€ says ChangeWave.

The bit of the report that I particularly enjoyed was when responders were asked to list their overall Dislikes of the Apple iPad, and â€œLack of Adobe Flashâ€ was top Dislike at 11%. Clearly Steve Jobs needs to write another open letter, and fast! 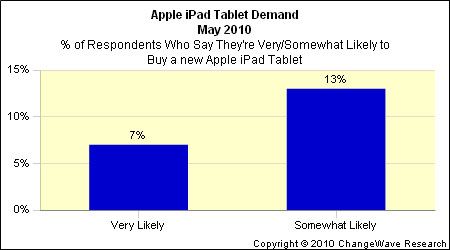 Apr 13, 2011
ipaduser434
I
M
New Survey Finds That Customers are Still in Love With Their iPads