Our summer home in TN is in the boonies, so we have no high speed internet or WiFi. We use Verizon cellular and our iPads and iPhones. Cellular speeds are good enough that I can stream Amazon Prime movies to my iPad and iPhone using the Amazon Prime app. In an effort to stream to our dumb TV, I bought a lightning to HDMI adapter. It works with YouTube and videos that I have on my devices, but not with streamed Amazon Prime movies. In fact, the literature for the adapter specifically says it doesn’t work with Amazon Prime, Netflix, Hulu, etc.

There must be a way to get the movies from my iPhone or iPad to the dumb TV. Looking for suggestions here.

I think an Apple TV would do it. You'd need a router to set up a wifi network, which would not be connected to the Internet, but would let the devices talk to each other. Anyone try this?
OP

Not about to buy a pea pickin’ Apple TV to replace a perfectly good 55” dumb TV. I thought this would be a common thing to do and would draw lots of good suggestions.

Guess I’ll fire up the old windows laptop to get out from under Apple and see what I can do.

Apple TV Is not a television set. It is a streaming device.

larrycruzen said:
Not about to buy a pea pickin’ Apple TV to replace a perfectly good 55” dumb TV. I thought this would be a common thing to do and would draw lots of good suggestions.

Guess I’ll fire up the old windows laptop to get out from under Apple and see what I can do.
Click to expand...

Hi Larry - as already stated, an Apple TV is like a Roku device, i.e. used for streaming to a HDTV - a current Apple TV is shown below, first pic - now the specs are listed in the second pic (both from Apple's website), i.e. you will need a 'speedy' Wi-Fi network and an HDMI cable between the device and your TV - since you stated that your Wi-Fi service is poor, unless you have another option and/or can setup your phone as a Wi-Fi hotspot, might still be a tricky issue. Dave
. 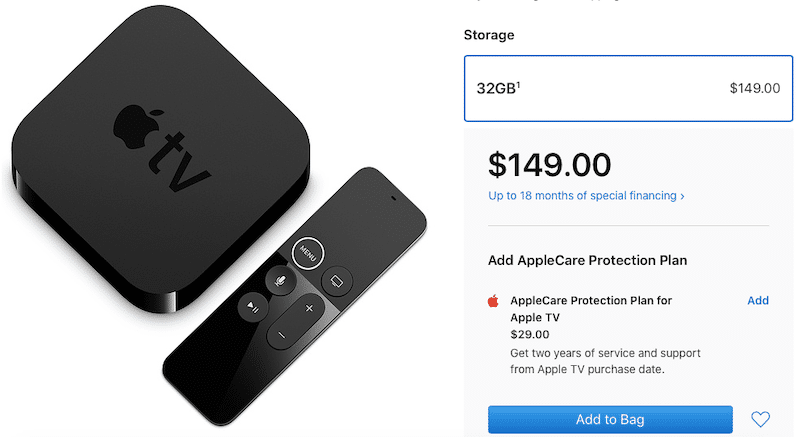 Update: I tried streaming Netflix from my iPad to my Apple TV 3, and it failed, telling me to use the app on the Apple TV instead (which would require it having its own Internet connection). As Dave noted, if you can make your phone/iPad a wifi hotspot, that's probably your best option.

It wouldn't surprise me if Hulu and Prime failed as well, though I don't use them and cannot test.

My Apple TV was the best thing to happen to my old, dumb-but-beautiful 50" Panasonic plasma TV. A used 3rd generation model shouldn't cost much, and I actually prefer the gen3 over the latest one.

One more thought...Netflix will let you save most movies to your phone or tablet. You might be able to stream a saved movie over your cable. No idea whether Hulu or Prime permit saving.

In the end, it’s those apps that choose not to support HDMI out. Apple makes it possible, even makes it a default if you are using mirroring. I’m not sure why Amazon and Netflix choose to block video out on HDMI, but it is annoying.

I’ve never tried it on my Android devices. I don’t have an HDMI dongle for them. I wonder if it works.

It will work on a computer; because to the computer the TV is just a low res monitor. (though HDTV is higher resolution than a lot of older monitors). If it didn’t work on the TV, then it wouldn't’ work at all.

While I do own and like my Apple TV, I don’t know if I’d buy one just to tide me over a vacation. Moreover, it needs a wi-fi network. You can probably use the iPhone’s hotspot, but I don’t know if that would work and I’m not willing to bet on it.

If I was going to get a vacation streaming dongle, I’d probably go for the far cheaper Google or Amazon devices. Though I wouldn't guarantee them working over the hotspot either, they are cheap, and you can always return them (with in a few days) if they don’t work.

Jupiter7 said:
Apple TV Is not a television set. It is a streaming device.
Click to expand...

Well, now I know what an Apple TV is....thanks, Jupiter, LannyC and Dave.

Twerppoet, always glad to hear from you. A friend of mine uses an Android phone and a $12.95 dongle and very successfully streams Netflix, Amazon and Hulu to his TV. I blame him for my current frustration.

I have a new Google Chromebook laptop which is basically an Android device. It was a gift which I have never used because of my complete ignorance of Android machines. As soon as I figure out how to turn it on and download apps, I will try streaming with it and my shiny new dongle that Apple doesn’t like....I bet it will work.

Good luck! Let us know how you get on.
OP

Well, so much for using the Google Chromebook. Turns out, only way to connect the chromebook to cellular is thru an Android phone. Sort of like trying to use a non-cellular Apple watch w/o an iPlhone.

Guess I’ll have to dig out my 9 year old windows laptop and try it. I expect that will be a loser, too, because the operating system is probably obsolete.

Seems like there should be a way to Bluetooth the Amazon Prime movies from the iPad to a dumb TV via an inexpensive HDMI/Bluetooth adapter plugged into the TV. Maybe not. It sort of feels like Apple has somehow managed to block them from getting out of the iPad.

I’m pretty sure Bluetooth is too slow for HDMI.

I’m surprised the Chromebook won’t work with your iPhone. Once you turn on the iPhone’s personal hotspot, the Chromebook should see and treat it like any other wi-fi network.

Note, it will not self discover, remotely turn on, and join the iPhone’s hotspot, like other Apple devices; but joining manually on the Chromebook after manually turning it on (on the phone) should work.

Then again, I don’t own a Chromebook. Maybe Google did something odd with them. I say Google, because I have no problems with my Windows laptop joining my iOS hotspots. Heck, my Android tablets have no problem connecting with my iPhone’s hotspot.

Oh, I did look into the Netflix/Amazon issue a bit more. The waters are cloudy, with no one willing to make a statement about what is going on (according to the one article I found on the subject). No comments from Apple either; though that is par for the course with them.

The silver lining is that maybe Android devices will stream Netflix and Amazon prime over HDMI. I don’t have the adaptor, so I can’t try.
OP

Twerppoet, you are right, as usual. Despite the help section saying that it had to connect thru an Android phone, it did recognize my iPhone hotspot and I was able to get onto the internet with the Chromebook.

It refuses to download the Amazon Prime app from the google play store, however, saying that this particular Chromebook isn’t compatible. It would download Netflix and Hula apps, but I suspended those accounts when I left civilization in Florida.

Don’t have much use for this Chromebook. Back to being a paper weight.

Unless I can get my old Windows laptop working, I’m going to quit wasting time on this and settle for what I get on DirecTV satellite.

My final suggestion: More walking and podcasts. I especially recommend “The Incomparable Radio Theater”. Really good spoofs on old radio shows. I also like “The TED Talk Radio Hour” for more thought provoking content.
You must log in or register to reply here.

T
iPad 2, Amazon's Prime, and Google's Chromecast: do they work together?

T
Can Roku be used to stream movies on iPad2 to a non-Apple TV?

T
How to transfer Amazon Prime movies so they are visible on TV larger screen?