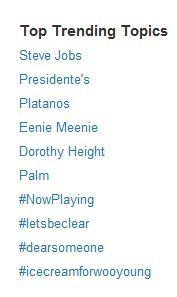 You know that Apple CEO Steve Jobs is up to something even more interesting than usual when you see that out of nowhere heâ€™s replaced Justin Bieber as the Number 1 trending topic on Twitter. And the reason for all the commotion? Heâ€™s only gone and written a blog post on Apple.com entitled â€œThoughts on Flash.â€

Itâ€™s a lengthy piece which leaves the world in no doubt about Jobsâ€™ and Appleâ€™s position on Flash, after all the â€œhe said-he saidâ€ toing and froing between Apple and Adobe. Jobs says that he wants customers and critics to â€œbetter understandâ€ why Apple doesnâ€™t allow Flash on iPads, iPhones and iPods. He says that Adobe is wrong to think that the decision is driven by business concerns, and that it is in fact all based on â€œtechnology issues.â€ Jobs then goes on to say that it is Apple that is â€œopenâ€ and Adobe that is â€œclosedâ€, rather than the other way round as Adobe claims, stating his belief that Adobeâ€™s Flash products are â€œ100% proprietaryâ€, as they are controlled entirely by Adobe. In contrast, Jobs says that Apple has adopted HTML5, CSS and JavaScript, all of which are open standards.

In the lengthy post, Jobs also takes issue with Adobeâ€™s claims that 75% of video on the web is in Flash, countering that almost all of that content is also available in H.264, a more modern format, which is viewable on iPhones, iPods and iPads. In particular, Jobs says that the iPad offers â€œperhaps the best YouTube discovery and viewing experience ever.â€As for Adobeâ€™s claim that Apple devices canâ€™t play Flash games? Jobs wipes the floor with it with this succinct paragraph:
â€œAnother Adobe claim is that Apple devices cannot play Flash games. This is true. Fortunately, there are over 50,000 games and entertainment titles on the App Store, and many of them are free. There are more games and entertainment titles available for iPhone, iPod and iPad than for any other platform in the world.â€
When it comes to reliability, security and performance, Jobs isnâ€™t pulling any punches either, saying that Symantec recently named Flash as having one of the worst security records in 2009. He also repeats his assertion that Flash is the number one reason for Macs crashing.

Continuing to hammer his point home with conviction, Jobs goes on to cite even more reasons why Apple will not have flash on its mobile devices: Flash is a bigger drain on battery resources, was designed for use with a mouse so is therefore no good for touch screens, and, the most important reason of all, according to Jobs, because Adobe wants to let a â€œthird party layer of software come between the platform and the developerâ€, which he believes â€œresults in sub-standard apps and hinders the enhancement and progress of the platform.â€

Jobs concludes by saying that Flash was created for PCs and mice, whereas the mobile era is for â€œlow power devices, touch interfaces and open web standards â€“ all areas where Flash falls short.â€ And finally, the coup de grace: â€œPerhaps Adobe should focus more on creating great HTML5 tools for the future, and less on criticising Apple for leaving the past behind.â€

I would like to thank Maura Sutton for her journalistic prowess. I spend more time reading her articles on these pages than anything else. Thank you!
U

I like Flash and rias, I also like the iPad ... It's also odd because as I ear the back and forth, I am also indifferent to outcome, if flash isn't on iProducts, no biggie.

The argument about the open and closeness is weak on both sides but I have read into html5 more in last month with the iPad and it does appear to solve some of the embedded videos issues .... Granted it is funny that html5 video support requires the site owner to create a few different versions of the video and do a bit of if else scripting.

While it's fun to read two big companies go back and forth, it does seem to be blown out of the water. If you want flash, go to your pc and laptop... Else live without it. I do find it interesting the flash on my MacBook after a few minutes cause my fan to run nots, etc while my pc never heats up.

I guess as I write this out I realize I too disliked flash but lived with it because it mushroomed across the web and I had no choice in daily browsing. Plus all videos were flash for sometime, but if you reds about h264 and other formats, you will see it's an emerging standard.

I still agree that flash is crap. It was great in the 90s but come on already...evolve!!! If I were to vote on any proprietary web dev enhancer I would say sliverlight is a million times better than flash in all respects.
You must log in or register to reply here.