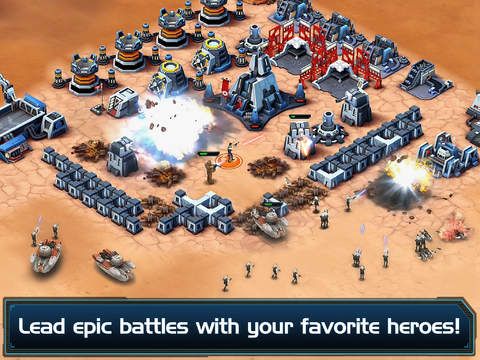 Disney is expanding the 'Star Wars' iOS franchise with the 'Commander' real-time strategy game, bringing real-time strategy "Rebellion vs. Empire" gameplay to Apple's iPhones and iPads. The Star Wars: Commander game from LucasArts is now available on the iTunes Store and you can go ahead and follow the link at the end of the article to download it. Here's how its official description sounds like:

Charge into battle on distant planets, and lead your troops to victory in this action-packed, combat strategy game! Build a base, recruit an unstoppable force, and challenge players across the Star Wars universe in Star Wars™: Commander!

During a time of Galactic Civil War, competing forces need allies for their cause. The Rebellion rallies for justice and freedom, while the Empire seeks control of the galaxy. Where does your allegiance lie? Will you side with the Empire’s strength and relentlessness, or the Rebellion’s heroism and resourcefulness? The choice is yours!

Rise through the ranks as a powerful battlefield commander in this exciting game of strategy and competitive galactic combat!
Click to expand...

The game is set in the Star Wars universe during the "Galactic Civil War", and you can take sides with the Rebel Alliance or the Galactic Empire. Star Wars: Commander is touted as a blend of base defense and full-on assault game types. It comes with in-game mechanics like upgradable weapons and comics-inspired graphics. Here are its most important features enlisted:

The game will be released exclusively for iPhones and iPads at launch and is Disney's third branded Star Wars title since the company took over Lucasfilm, and thereby LucasArts, in 2012. Star Wars: Commander is available as a free 56.9MB download from the iOS App Store, but there are also a bunch of inside app purchases that are meant to improve your gaming experience.

So we still get to join the dark side? Oh this is gonna be awesome!
J

anyone looking to join a fun and strong start up Jedi team check out BanthaDroppings.
You must log in or register to reply here.

M
Commander: The Great War Coming to iPad on July 25