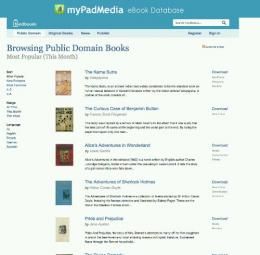 It has just been revealed that a site called "MyPadMedia" has been selling access to feedbooks, promising unlimited downloads of new books, newspapers, comic books etc. for 50$. I'm pretty sure feedbooks needs no introduction anymore, but for any newcomers, it's a brilliant site offering thousands of PD and CC original books for free, beautifully presented in the format of your choice. MyPadMedia charged users 50$ and then re-directed them to feedbooks, with a MyPadMedia banner pasted across the top of the page.

The scam was revealed by Gear Diary, who contacted feedbooks today to verify their affiliation with MyPadMedia. Feedbooks responded immediately, taking steps to sqash this scam. Visitors coming from MyPadMedia will now see a special warning screen to inform them of the situation, and legal action has also been taken.

More details on Gear Diary who broke the story. Avoid like the plague, and spread the word !

Careful, this is bordering on spam...second time you've posted this.
M

It has just been announced? We've been fighting those idiot spammers since day one
OP
4

gentlefury said:
Careful, this is bordering on spam...second time you've posted this.
Click to expand...

You are damn right. I aim to make sure everyone is on top of these jerks and their friends.
M

You're like 4 weeks late, the mods have been banning these people immediately ...

Could the warning be made sticky? You are excellent at catching the spammers, but the cash incentive they get keeps them very motivated.
You must log in or register to reply here.