Show off your home theatre/ hifi

Took a while over building this one. 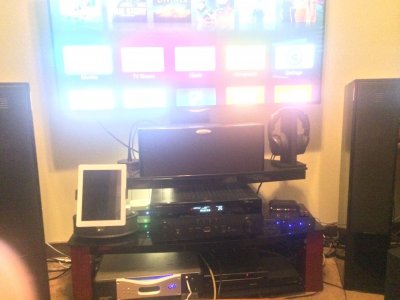 Central to the system is AppleTV feeding my Yamaha receiver. Output is to LG 55UB8500 3D 4K TV and a mix of Martin Logan, Polk Audio and Definitive Technology speakers. Control is via Yamaha's iPad app, which takes care of all receiver functions and Apple's Remote app which keeps an eye on AppleTV and iTunes. There are also a couple of Apple routers in there; an Extreme and an Express. Another Extreme lives downstairs. Network is monitored by Apple's Airport Utility on Mac and iPad.

Hi Kevin - your setup looks quite nice and complete!

Mine is more modest and has to accommodate my den area - two pics below w/ one showing: 1) Old EV 2-channel stereo speakers on the shelf w/ books & just some of my CDs; 2) HDTV w/ soundbar/subwoofer (bluetooth); 3) Roku device (receives Wi-Fi from the adjacent room via an Apple Extreme router); 4) Cable DVR; 5) Sony Wi-Fi capable blu-ray player (which can handle virtually all optical media); and 6) 42" LG HDTV - would like one slightly larger but the room is not there. 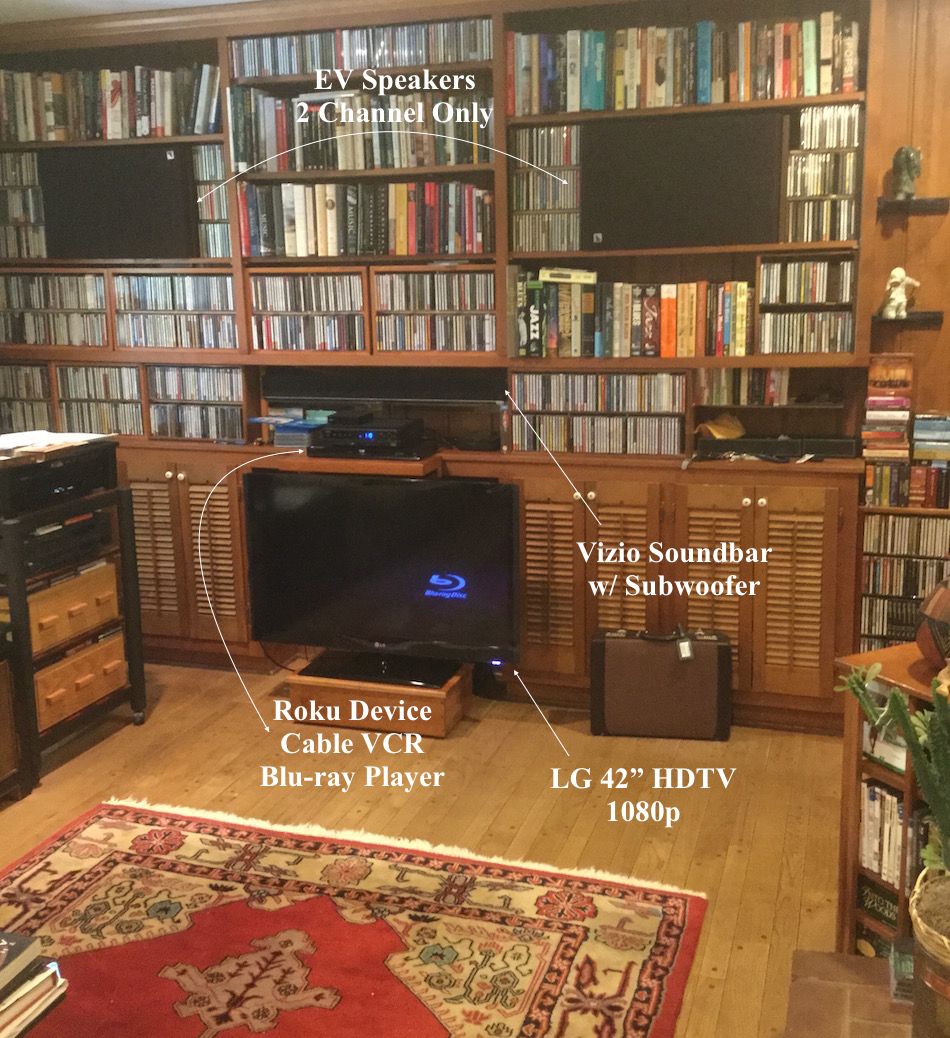 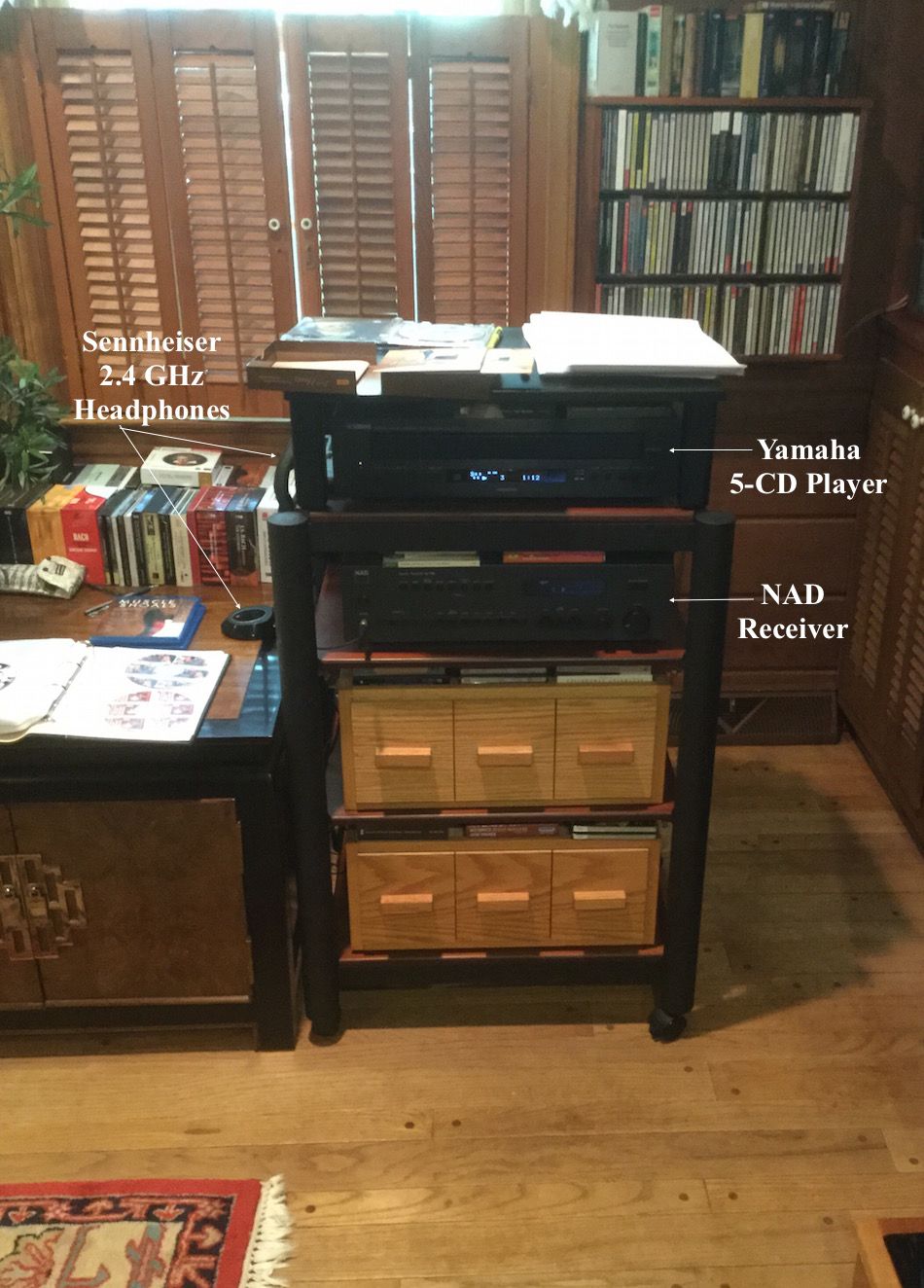 Recently added a pair of Martin Logan Motion 40 speakers to my system, relegating the Motion 20s to the surround position. Also wired in a pair of Paradigm 7SE speakers along with the Definitive Technology SM55s in the front presence position. The result is awesome. I'm presently playing Bach organ music at thunderous volume. Twin subwoofers help with the bass, although the Motion 40s have quite respectable bass handling in their own right.

I have a pair of Wharfedale speakers that are presently being used as stands for the DefTechs. I'm toying with the idea of adding them into the system. Not sure how many more speakers the amplifier can handle, though.

The Yamaha amplifier allows a video source to be selected independently of the sound source,so I'm using that facility to direct the video output of my Mac to my 55" TV via Airplay on AppleTV.

Control as always is via the Yamaha app on iPad and/or iPhone, and the source is the PC, still running Foobar. I installed a wireless network card into the PC in my quest for a truly wireless system.

I was reading a few weeks ago that the developer of Foobar is intending to do a Mac port as soon as he's finished fooling around with the Windows10 version. This is good news. The program is extremely versatile. I'll probably start a thread for it with some tips and tricks if there is any call for it.

Most of my recent changes have been with the intention of getting rid of wiring, so the Cambridge Audio DAC is now employed on a separate 2 channel system, directing the output of a CD carousel to my Polk Audio Woodbourne, which doesn't require a separate amplifier.
OP

Done a bit of playing around since I last updated this thread. The Polk Woodbourne is gone. I traded it for an HP All In One PC running Windows 10. That is running Foobar2000 and is connected wirelessly to my network, but its main purpose is ripping CDs using EAC (exact audio copy). I don't fool around with mp3 now. All of my rips are to FLAC.

My Wharfedale and Paradigm speakers are also gone. The Martin Logans are pretty well capable of doig everything I'm looking for so they are in front and surround positions, with the DefTechs in front presence. The Polk Audio LSiM704 still commands the center position.

Subwoofers are still the same; Mirage S10 and SoundStage LF500. The SoundStage is made for a Canadian electronics retailer so it's probably unknown outside Canada.

I found that some DVDs have absolutely hideous soundtracks, so for a while, I switched my BluRay player to PCM output and directed the output to the Cambridge Audio DacMagic Plus, but have recently added a Philips DVD player, wired to the DacMagic, and reverted to HDMI output for the BluRay. So now DVDs go in the DVD drive and only BluRays in the BluRay player.

The future probably contains a pair of Martin Logan electrostatic speakers. I put them on my bucket list several years ago after hearing them once. Haven't yet decided whether to use them in a 5/7.1 system or a dedicated 2 channel system. Time will tell.

The iPad still controls the show, via Yamaha's excellent app. I've taken to displaying the Wikipedia page relating to the composer I'm listening to using AirPlay from my MacBookPro via AppleTV, and am learning a lot about the music I'm listening to and the people who wrote it. Who would have guessed that Antonio Vivaldi was an ordained RC priest or that Carl Orff was involved in an anti-Hitler propaganda initiative?
You must log in or register to reply here.