Screen casting from Ipad to a non-smart TV

Foolishly, my wife raised the question of how to do this on a subforum of a consumer forum dedicated to saving money. She was told to purchase a Google Chromecast, as this was the original of all 'casting' devices.

So. We spent £29 on the word of a complete stranger who sounded convincing but who we now realise knew absolutely nothing about what he/she was talking about. The Google Chromecast is useless, and Google knows it but omits to mention its incompatibility with Apple products in its Chromecast publicitity.

We should've known better than to trust to an Internet forum for genuine, dependable advice.

And yet here I am, back again on just such a website.

We have a 10 year old Sony Bravia non-smart TV, still in perfect condition and working faultlessly. For its time, it was incredibly well equipped: no less than 4 HDMIs. We're using 3 of them right now for a Roku stick, an Amazon Firestick, and a connection to our Humax recorder.

The fourth HDMI port is the one into which we've plugged the £29sworth of uselessness from Google in hope of being able to do that which we were told Chromecast would do: cast / mirror what's on screen on our iPads (either mine or my wife's) to the TV screen.

No such casting/mirroring occurs. When contacting Google for help, we're unhelpfully told all about receiving YouTube on Chromecast -- pointless, really, seeing as YouTube is an app on both the Roku and Amazon Firesticks. We don't need to cast/mirror YouTube at all.

What we're actually trying to do in this, the start of the second decade of the 21st Century, rather than the closing years of the 20th, is mirror a video playing in the Internet browser of our iPad. My wife uses Safari. I use Firefox.

We're interested in just one video: a rolling webcam broadcast of a place of great sentimental appeal to us both. The webcam is NOT screened on YouTube. I'm currently undergoing not-too-good health (post-stroke fatigue) and would be considerably cheered up to be able to have the webcam transmission on the TV screen now in our bedroom.

However, as noted, despite making seemingly endless enquiries, we seem to have exhausted the reservoir of experience and expertise that may exist beyond ourselves.

My wife has even been told to get an Apple TV (whatever that is.)

I well recall being able to screen cast / mirror whatever happened to be on the screen of my Samsung Galaxy Tab A way back when, but it would now seem that what's possible for owners of devices considerably cheaper than those made by Apple is absolutely not possible for those who stump up the premium to buy Apple.

Hi Scoggs - let me start the 'ball rolling' and hopefully others will 'chime in' w/ suggestions. First, you need to tell us which iPad models you own and what iPadOS is installed - features, requirements, etc. will vary. Second, have you tried an HDMI iPad adapter and tried to directly cable your iPad to the remaining HDMI port on your TV - I've done the connection w/ my earlier iPads successfully?

Finally, just to address the Apple TV issue - I own the Apple TV shown below - this is a streaming device (w/ its own Apple OS) that connects to your home network either wirelessly or cabled - I use Wi-Fi for my purpose; then an HDMI cable from the device to my HDTV makes the video/audio connection - my iPad Pro (or my Apple laptop computers) can then AirPlay and mirror their screens onto my TV (check the link) - apps can be added to the Apple TV interface, e.g. I'm now playing a Spotify playlist on the Apple TV (my TV has an optical audio connection to my den stereo so the sound is excellent). Obviously, looking at the price below, not an inexpensive choice? Also, there are different versions of AirPlay and the age of your TV may impact on how the devices interact (the link should allow you to check).

Let me stop there for you to respond and for others to add their thoughts. Good luck - Dave 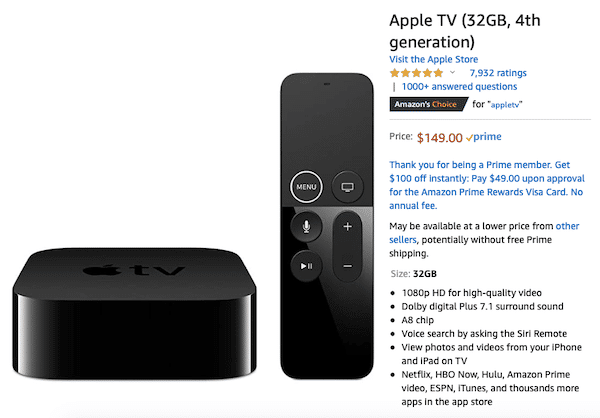 You mentioned Amazon FireTV. Do you own one of them? If so, install an app from Amazon’s store. I know two that can help mirroring your iDevice’s screen to the TV. One is AirScreen (free, with ads), the other is called AirReceiver (not free).
OP

Sincere thanks to Dave and to J.A. My wife's iPad was purchased new in 2017; mine is a 10inch iPad Pro, of 2018. I'm not sure of the model numbers. They're both running the latest recently updated iOS version.

Back in days (almost) beyond recall, I remember when we each had an Asus Transformer (amazing devices they were, when new) to which we attached as and when needed a long hdmi -micro USB lead to plug into the Sony TV so as to view videos we'd taken on holiday and which we'd earlier transferred from the camera's SD card into device memory.

As if by some kind of psychic transference -- probably at the same time you kindly made your post -- I remembered doing that, and also how we'd never much liked the potential danger of trip-uppable cable lengths snaking across the carpet between the Asus and the TV (hence why we went for wireless casting with our Samsung tabs).

As what we'd like to see on the big screen now isn't stuff that we need to constantly control/adjust from our armchairs, there's no reason to have 12ft of cabling at all; to watch a chosen webcam we can simply place the iPad next to the TV, connect up, and the webcam images will 'flow' from the iPad to the bigger screen. And we can leave it like that.

So . . . rather than continue in pursuit of a wireless solution alone, I did a 'Net search of iPad to TV HDMI connectors and eventually came up with 'Lightning AV digital connector', model number A1438, from Apple. It isn't stocked by Amazon (no surprise there) but is available (in the UK) at £49 from Apple direct or from Argos (same price|). Even though £49 seems a bit over-the-top, it is at leastg cheaper than acquiring Apple TV, an expensive streaming device as you rightly pointed out.

An eBay seller also offers the same item described as genuine Apple and unopened box (with a picture of the packaging featuring the Apple logo) for a little over £30 including postage. (See below.)

The price is tempting. There are sundry cheap versions available from various outlets on Amazon and eBay but I suspect they'll all prove to be a false economy; eBay's money back guarantee applies to this particular sale so that's reassuring.

J.A.'s information is also incredibly timely. We have the Amazon Firestick with Alexa voice control; it works fine and though we use our Roku/"Now TV" stick much more due to the paucity of choice on Amazon, I'm now going to set off now and track down AirScreen and Air Receiver.

Will update this post later today. Meantime, my thanks again to you both for your help: much appreciated!!

As promised: quick update. I had a browse through the iPad/Firestick range of apps out there, including the two thoughtfully mentioned by J.A. What seemed to come through quite clearly in the various customer reviews of the various apps was how unreliable they were. ither that, or their operation too often disrupted by ads. Mrs S didn't fancyme tackling any of the app solutions lest my blood pressure rise beyond what the medical people have warned against, and so, and so. . .

the solution has been 'Appleto Apple'. I've decided to purchase Apple's Lightning Digital AV Adapter -- and at full p[rice, too. I'm off to collect it soon from our neighbourhood Argos store (it's already in stock there). I decided against going bargain-basement shopping on eBay because tit turned out that the 'genuine' £31.75p article was being sold by a seller with more negatives than I'd prefer to deal with: I've bought and sold things on eBay UK since 2001 and still have a 100% no-negs feedback. If I can manage it, I'm sure others can; those who can't, I'll steer clear of, and especially traders with merchant accounts on eBay.

I've not purchased direct from Apple UK because I prefer to be able to return a faulty item (if it turns out to be faulty) to the retailer who sold it to me, it being the case that UK consumer protection is posited on the retailer-purchaser relationship, not the manufacturer-retailer-customer trio. Agos customer reviews are all laudatory where this Apple gizmo is concerned, so fingers crossed, all will be well. And if it's faulty, Argos will refund quickly, based on my previous experience).

Sincere thanks again to Dave and to J.A. for helping me focus my mind on this issue. 'Wired' is definitely the way to go in my case, seeing as how so many wireless app-based solutions seem long on promise but short on fulfillment.
You must log in or register to reply here.

New AllCast App Lets you Send Photos, Music, and Videos from your iPhone, iPad to Your TV