A few months back I sent my iPad pro in for a battery replacement and they shipped me a new or I guess refurbished iPad pro. There’s been a lot going on so I didn’t really take the time to go over the iPad I received with a fine tooth comb but today I noticed the motion on the iPad looked very jittery. I went over to UFO Test: Frame rate and discovered I am getting a 30 frames per second refresh rate. I went into the motion settings to make sure nothing was set to limit the 120hz frame rate that this iPad should have. I then went over to Apple support and did a chat, the woman I talk to asked me if I was using the correct charger which I was and then the chat dropped out. When the chat reconnected the guy asked me what the problem was and I said I really have to explain this again? He then said let me research the previous chat and came back with as I understand it your iPad is not charging to 120Hz… I left the chat because he didn’t seem to know what he was talking about which is irritating. I recently updated the to the latest 15.0.1 so there could be a factor. Anyway as for my question, does anybody know what’s going on or is my iPad malfunctioning? Though my iPad motion looks jittery I realize UFO test could be reading the information wrong so if anybody else has 120hz iPad and is willing to go over to your photo test to see what the results are I would appreciate it.

I just ran the same test on my 2017 iPad Pro (120 hz refresh) and got 30 hz from the first test. I turned off my VPN and closed all other browser tabs and apps, and it increased to 60 hz.
I never got a result of 120mhz, so I suspect the web site is not playing well with the iPad for whatever reason. 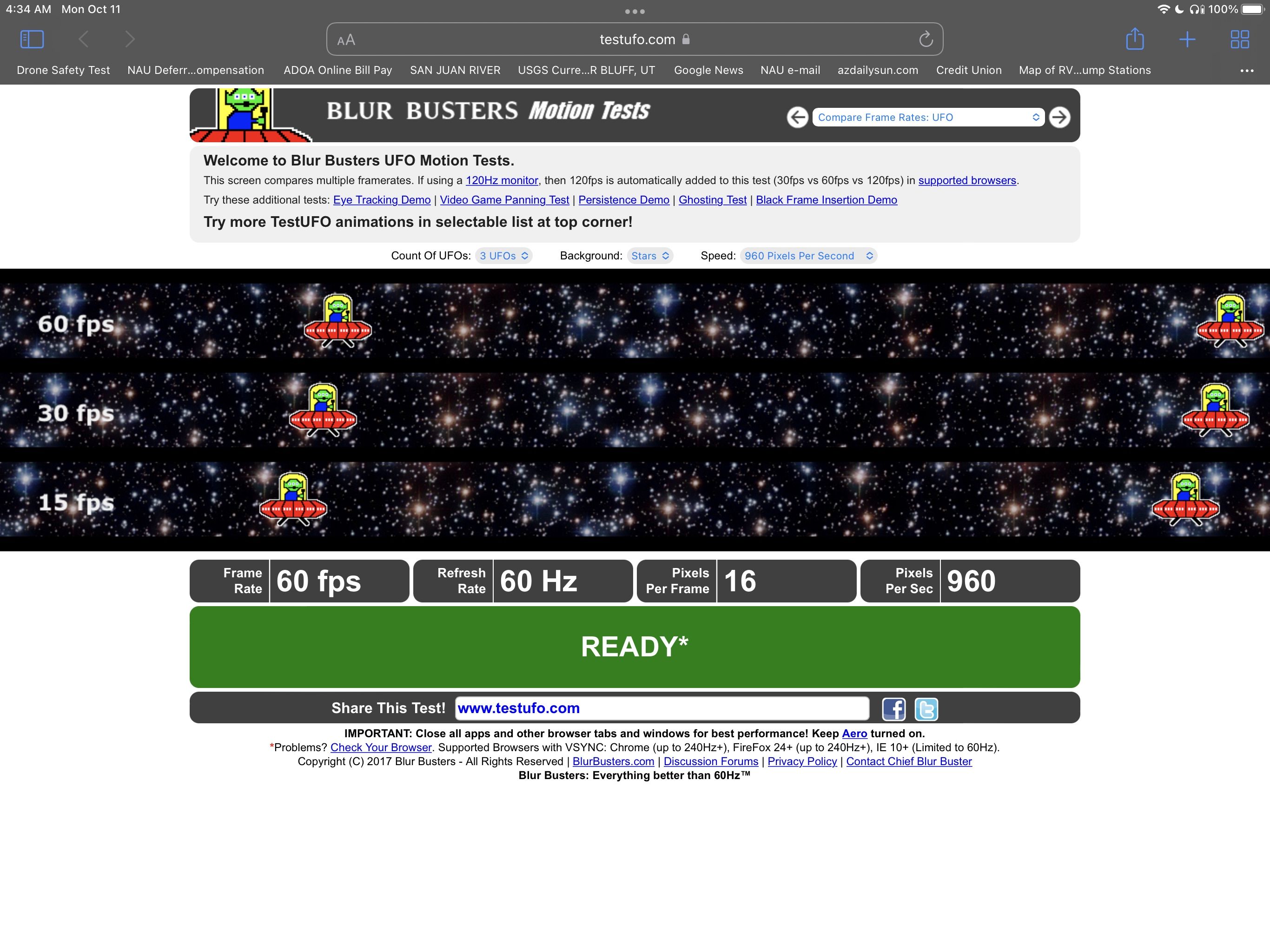 BikeFlagAZ said:
I just ran the same test on my 2017 iPad Pro (120 hz refresh) and got 30 hz from the first test. I turned off my VPN and closed all other browser tabs and apps, and it increased to 60 hz.
I never got a result of 120mhz, so I suspect the web site is not playing well with the iPad for whatever reason.View attachment 94654
Click to expand...

Well I feel a little better about the world thank you for taking the time to do that I do really appreciate it. I was reading up on the refresh rates on the iPads and apparently the 120hz ipads use adaptive refresh rate (I don’t remember what they called the technology exactly) which lowers the refresh rate to save battery when you don’t need it… that in combination with the website probably not being optimized for iPad is probably what’s going on though when I do scroll around the iPad it does look choppy so…anyway again thank you for taking the time.

It's called Pro Motion. Not all apps support ProMotion correctly, though one hopes Apple's own apps do it right.

I don't know what happened with the first tech support person, but I suspect the second one was confused by whatever the first one wrote down in the chat notes. Hard to say. The Apple Support Techs I've worked with have always been knowledgeable, but there are always exceptions. Of course, I've been lucky enough that I've only worked with tech support a couple of times.
You must log in or register to reply here.

M
iPad pro screen clicking/popping - is this happening to anyone else???