One Million Apple iPads are SOLD! 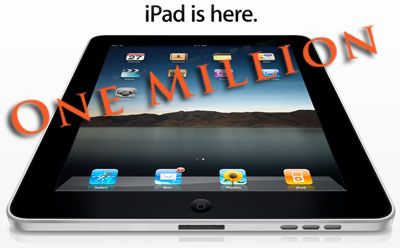 Apple has just announced they have sold over 1 million iPads since the release on April 3rd. The good news just doesn't stop there, Apple has also posted that iPad users have downloaded over 12 million Apps and 1.5 million ebooks. These stats are just incredible, imagine where we'll be at in 1 year!

Check out the full press release below:

CUPERTINO, Californiaâ€”May 3, 2010â€”AppleÂ® today announced that it sold its one millionth iPadâ„¢ on Friday, just 28 days after its introduction on April 3. iPad users have already downloaded over 12 million apps from the App Store and over 1.5 million ebooks from the new iBookstore.

â€œOne million iPads in 28 daysâ€”thatâ€™s less than half of the 74 days it took to achieve this milestone with iPhone,â€ said Steve Jobs, Appleâ€™s CEO. â€œDemand continues to exceed supply and weâ€™re working hard to get this magical product into the hands of even more customers.â€

iPad allows users to connect with their apps and content in a more intimate, intuitive and fun way than ever before. Users can browse the web, read and send email, enjoy and share photos, watch HD videos, listen to music, play games, read ebooks and much more, all using iPadâ€™s revolutionary Multi-Touchâ„¢ user interface. iPad is 0.5 inches thin and weighs just 1.5 poundsâ€”thinner and lighter than any laptop or netbookâ€”and delivers up to 10 hours of battery life.*

Developers have created over 5,000 exciting new apps for iPad that take advantage of its Multi-Touch user interface, large screen and high-quality graphics. iPad will run almost all of the more than 200,000 apps on the App Store, including apps already purchased for your iPhoneÂ® or iPod touchÂ®.

Apple ignited the personal computer revolution with the Apple II, then reinvented the personal computer with the Macintosh. Apple continues to lead the industry with its award-winning computers, OS X operating system, and iLife, iWork and professional applications. Apple leads the digital music revolution with its iPods and iTunes online store, has reinvented the mobile phone with its revolutionary iPhone and App Store, and has recently introduced its magical iPad which is defining the future of mobile media and computing devices.

Is it some kind of Apple law that every time company representatives speak about the iPad they must use the word magical?
G

i can see why, i had reservations about purchasing my open box 64gb ipad from best buy on the 10th of april, i have 45 days to return as i am a silver rewards member, and mainly a pc guy, but believe me, every day i turn this thing on i find something new i can do or use on this thing that is so much easier to do than a netbook, or a laptop, i use my desktop for just that, things to do at home, but for ease of use and apps available, the ipad is the future of computing, the newest app i found today for free is the yahoo entertainment app, go see for yourself, another great useful app, can't wait until tomorrow to see what else i just seem to stumble on that i like, another reason to NOT RETURN this great product
I

I can only imagine how fast the growth will be after the new OS is up & running with multitasking & unified mail etc.

No wait, not magical, but rather, supercalifragilisticexpialidocious!

No wait, not magical, but rather, supercalifragilisticexpialidocious!
Click to expand...

If Apple had seen things coming and had manufactured ahead of time, the numbers would be about 5 millions worldwide.

I can understand how they sell so "magically" fast! Everyone who has gotten their hands on mine wants one now. My daughter ordered one the day after playing with mine, and my son yesterday was trying to figure out how to afford two for him and his wife I've passed the 500 Meg mark on data just since Friday! It's constantly in my hand.
OP

It took 74 days to sell one million iPhones, and that was back when Apple didn't have any competition in the smart phone market other then rimm (blackberry)

"One million iPads in 28 days -- that's less than half of the 74 days it took to achieve this milestone with <ygg:entity id="t6" ref="#nq9sJNw43RGue9xXXWfsEA">iPhone</ygg:entity>,"
Click to expand...

iDan said:
â€œOne million iPads in 28 daysâ€”thatâ€™s less than half of the 74 days it took to achieve this milestone with iPhone,â€ said Steve Jobs, Appleâ€™s CEO.
Click to expand...

Oops, my bad. 28 days, that's even more superkali...whatever I said.

What is going to be key for continual sales is to get more accessories available, and to provide solutions for the little annoyances that have come to light.

I was expecting they would shatter the one million mark after the 3G launch. To me the most interesting news though is 1.5 million books. If that's the case, Amazon will be in trouble soon....

Anybody knows numbers about Amazon?

iVan said:
Anybody knows numbers about Amazon?
Click to expand...

I have never seen hard numbers from Amazon, they are very protective. Their secretive nature makes me think they want the number perceived to be more than it actually is.
W

Jeff Bezos said they had sold "millions" of Kindles in the Q4 2009 report. That's probably the best estimate we'll get.

So Apple has passed the 1 mill mark for the iPad. So what you think? How many will they sell in calendar 2010?
You must log in or register to reply here.

It's Official! iPad Available in US on April 3
2