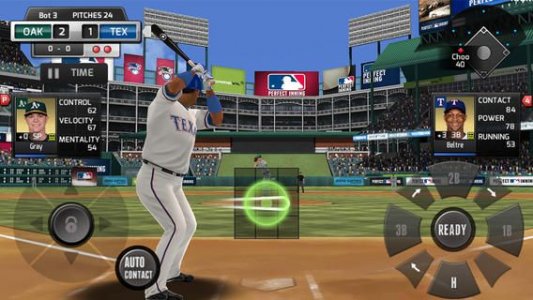 ​
There are plenty of baseball-related games on the iTunes Store, but the recently launched MLB Perfect Inning title is one of the best console-quality simulator games thatâ€™s been fully-licensed by Major League Baseball. The game comes with so many features that only a title on your computer or gaming console could have. You can play the game on your iPhone or iPad and you can draft, train and trade your favorite players to build the ultimate roster. Here are some more of the gameâ€™s top features:


Play and save up to five seasons with an option to replay any season.


AI Play â€“ Let your team play on its own through an AI simulation.


Chance Play â€“ Intervene and play only at crucial moments.


The graphics of the game are very sharp and life-like but it might take a while until you get accustomed with the game controls. The comes with a size of 68.5 MB and is available as a free download, but there are some inside-app purchases that you can make use of for an improved gaming experience.


Source: iPhoneForums
You must log in or register to reply here.

Revamped Version of R.B.I. Baseball Gets Released on the iPhone and iPad