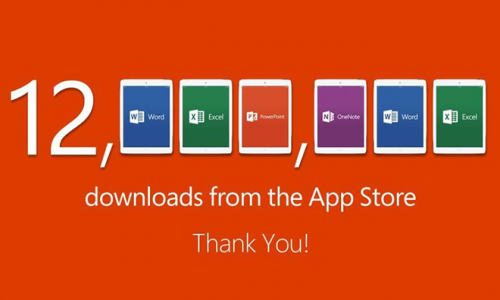 ​
Microsoft has been reluctant to the idea that they should release Microsoft Office apps for the iPad especially under the helm of the previous CEO, Steve Ballmer. Now, under Satya Nadellaâ€™s lead, the company seems to be rejuvenating thanks to the new changes. Shortly after the release of iPad specific Microsoft Office applications, they were already included in top downloaded apps from the App Store. And now, the Microsoft Office team announced on Twitter that there have been more than 12 million downloads since the release:

More than 12 million downloads of Word, Excel, PPT & OneNote for #iPad from the @AppStore <3
Click to expand...

We can see that in just one week, Microsoft has managed to please millions of iPad users all over the world and this number is bound to increase even more in the future. All of the three apps - Microsoft Word for iPad, Microsoft Excel for iPad and Microsoft PowerPoint for iPad can be downloaded for free, but in order to create and edit files, you will need a Office 365 subscription.

Another big drawback is the fact that thereâ€™s no way to print the files with the free apps, but Microsoft hinted that this could be taken care off in a future update. Are you among those who have downloaded Microsoft Office apps for the iPad? And if you are, what is your impression and what do you think can be improved? Let us know by leaving your comment below.

are these the free downloads or the paid subscription down loads ?

Good karma said:
are these the free downloads or the paid subscription down loads ?
Click to expand...

You download them for free but you have to make a 100$ IAP for subscription.

I would like to see the figures on how many of those 12,000,000 downloaders went on to pay the annual subscription fee. That would be a more accurate measure of it's success.
Last edited: Apr 9, 2014

scifan57 said:
I would like to see the figures on how many of those 12,000,000 downloads went on to pay the annual subscription fee. That would be a more accurate measure of it's success.
Click to expand...

exactly :thumbs::thumbs: As usual, Microsoft is not stating whether people paid for it or not, i suspect its the latter, because MS would have gloated it as an achievement if so many people paid
You must log in or register to reply here.

Microsoft Reportedly to Unveil Office for iPad on March 27