Marvel Comics App To Bring Over 500 Titles To iPad 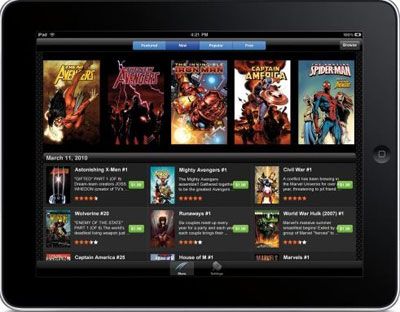 Itâ€™s the announcement comic book fans have been waiting for â€“ Marvel Entertainment has today launched its Marvel Comics App for iPad. The app launches today with over 500 of Marvelâ€™s greatest comic books, featuring Iron Man, Captain America, Spider-Man, Hulk, Thor and many more. Each comic will be presented at extremely high resolution.

Fans can expect to have unrivaled access to Marvelâ€™s library, with launch titles ranging from the first appearances of characters such as Spider-Man and the X-Men, to modern classics such as the debut of Red Hulk, Jonathan Hickmanâ€™s acclaimed Fantastic Four run, Joss Whedon and John Cassadayâ€™s Astonishing X-Men and lots more. Every comic has been optimized through painstaking re-coloring and re-digitizing of select content.

Marvel and ComiXology developed the app together, with the aim being to create the perfect app for new readers, who will have the option to preview three pages from each available comic before purchasing, as well as being guided by a recommendation engine to find new comics that might suit their tastes. The app also includes a comic shop locator. Hereâ€™s Dan Buckley, publisher and CEO, Marvel Publishing, talking about the app:

â€œWeâ€™re excited to introduce an unparalleled digital comic experience to our fans with the Marvel Comics App for iPad. The iPad is the first device that offers us a chance to present digital comics that are even close to replicating the experience of reading a print comic. This new world of digital comics distribution provides us great opportunities to reach new readers and allow consumers to sample our diverse stories and characters, and we believe it will drive these new fans into the App Store and local comic shops each week to find even more.â€

The Marvel Comics App for iPad is available for free from the iPad App Store, with individual comics priced at $1.99 each, with new content arriving every week. To celebrate the release of the app, Marvel is offering select titles for free for a limited time, such as New Avengers #1, Captain America #1, Invincible Iron Man #1,Thor #1 and Super Hero Squad #1. The app is also available for iPhone and iPod touch.

What will this do to the value of issues that comic book collectors have kept for decades?

Sonny Burnett said:
What will this do to the value of issues that comic book collectors have kept for decades?
Click to expand...

I would say increase the value. If less paper versions are sold... then any paper versions you have will be that much more of a collectors item. It won't be an immediate price jump... but if new comics go the way of digital format... then I bet you will see a huge boom in collectors and investors going out and snatching up all the physical copies they can. One of these years/decades we'll be telling our children "when I was your age... I used to get comic books printed on actual paper" and you can pull out your old box of issues and show 'em! You may get a "woah, cool" or a "that's lame dad" but I bet they'll still be worth something years from now.
A

This is definitely one of the many apps I'm installing on my iPad, i've been eyeballing this since seeing it online.

cheapest iPad $499 need to have apps for iPad $250, Enjoying and creating content on the iPad, Priceless!
D

Will you be able to purchase new issues that have just been released?
Any other comic book companies have a similar app?DC?
You must log in or register to reply here.

M
Marvel Launches More Than 80 Graphic Novels in the iBookstore