I will be camping out the San Francisco Apple Store on Stockton street starting at 3am (ish) Pacific time and will update this post with pics and updates on the line up until the opening at 9am. There will most likely be a gap for a couple of hours as I will not bother you with the streetlife of the Barbary Coast between 4am and 7am!
And yes, it will be raining!

Just found out theres 4 or 5 people in line already so Im gonna head down there sooner than planned! 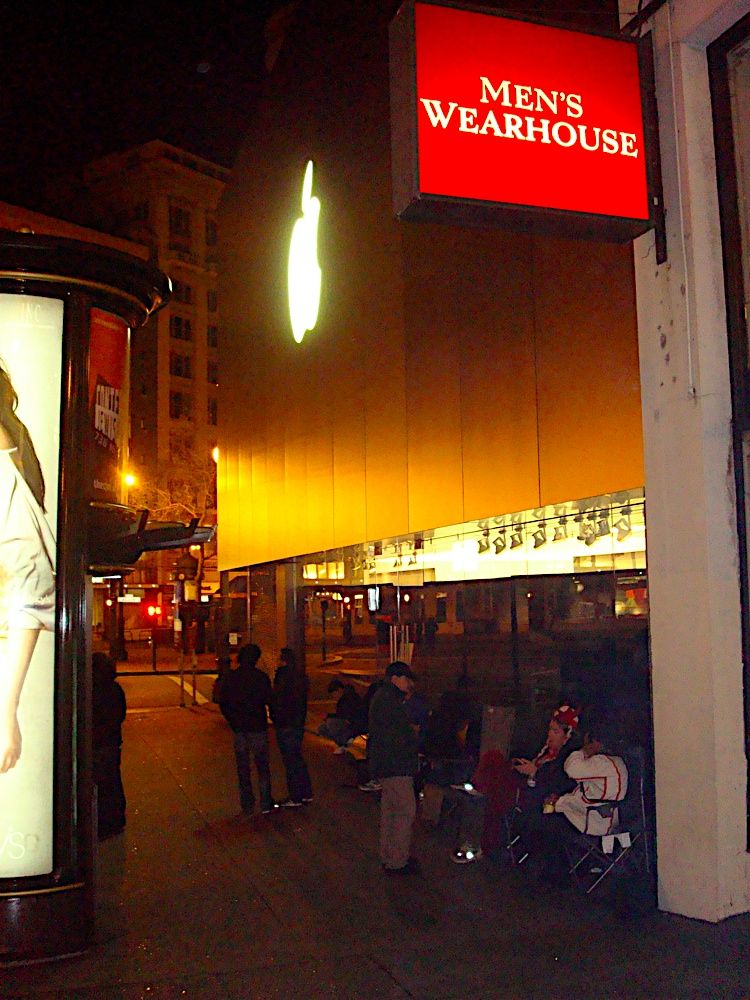 Seems like me and Alaa (green jacket) from MacRumors.com are afterall first in line. They group of four before us does not have any reservations or preorders, but are here to heckle the ipad to the media later on!! Friggin wierdos! On another note Im asking you all to bear with the quality of my pics as I still love and hang on to my iPhone 2G, low quality pics and all 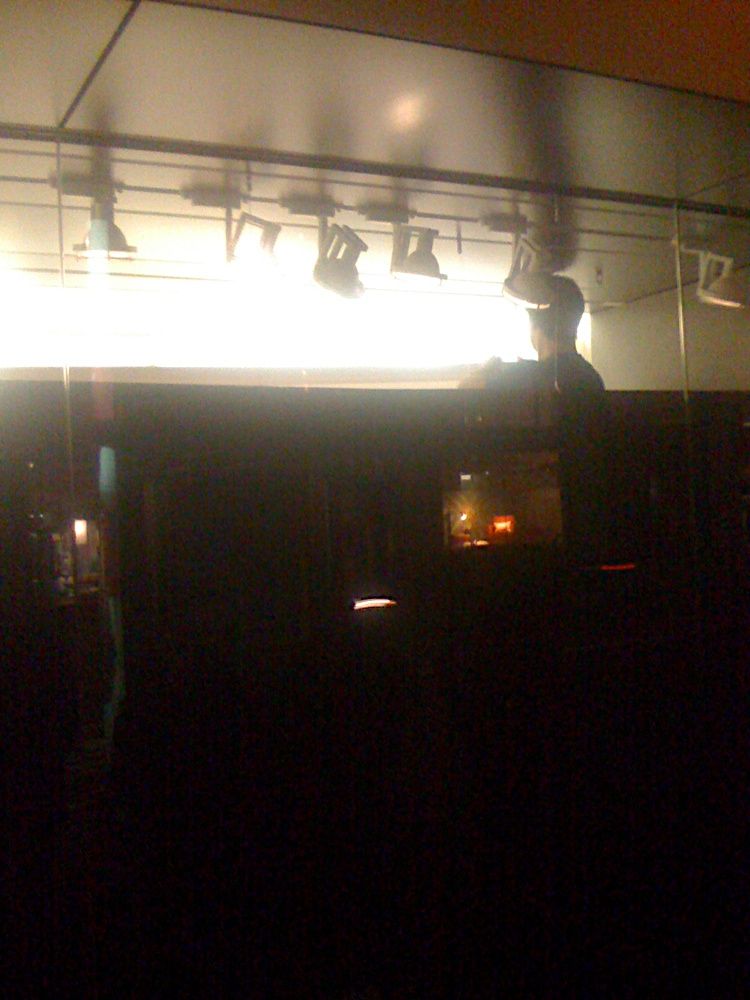 Apple staff is making noise inside hanging banners behind the curtains entertaining the line which now is up to eleven people! Very cool crowd! No rain yet which also rocks! 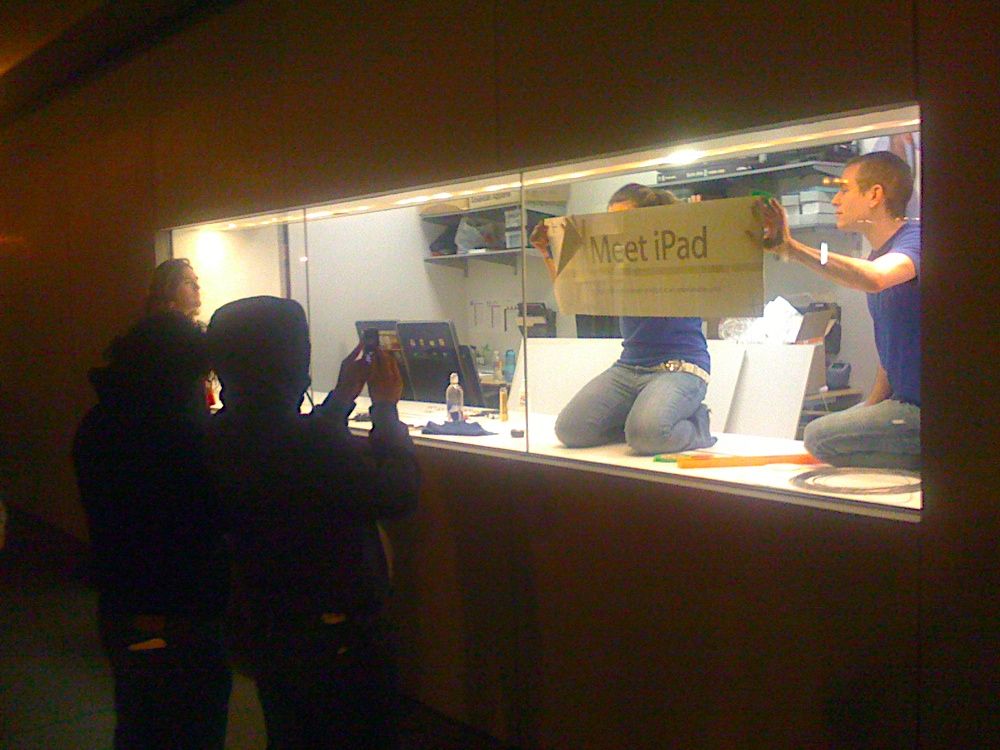 Applestaff is changing decals and windowdisplay on the side of the store. We all are like kids staring at the goldfish tank Lol! 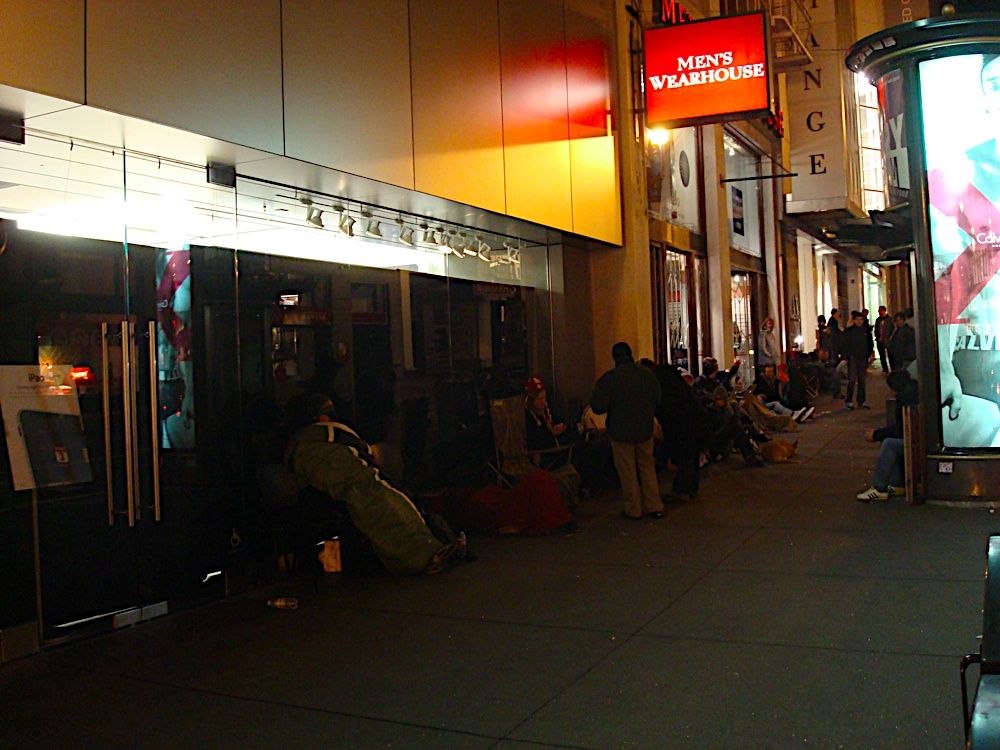 Line has now grown up in the 30s. Feels like time is flying by!
Doing triva and talking gadgets with the initial 10 ( with exception of the first four guys who are ipad haters, still a bunch of wierdos. Lol) 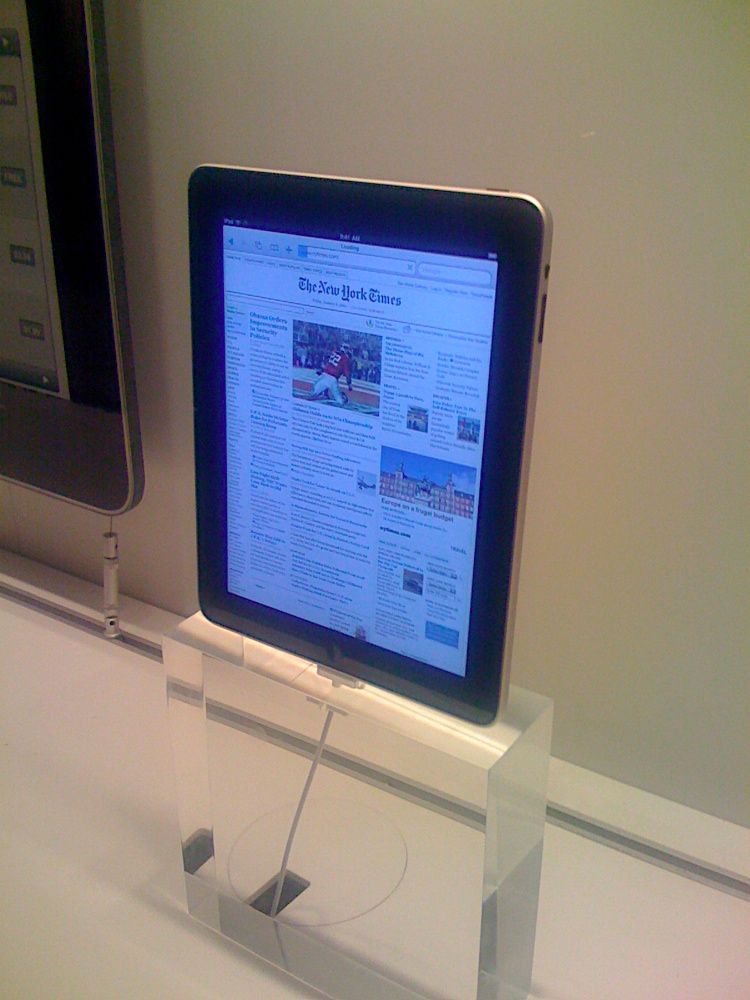 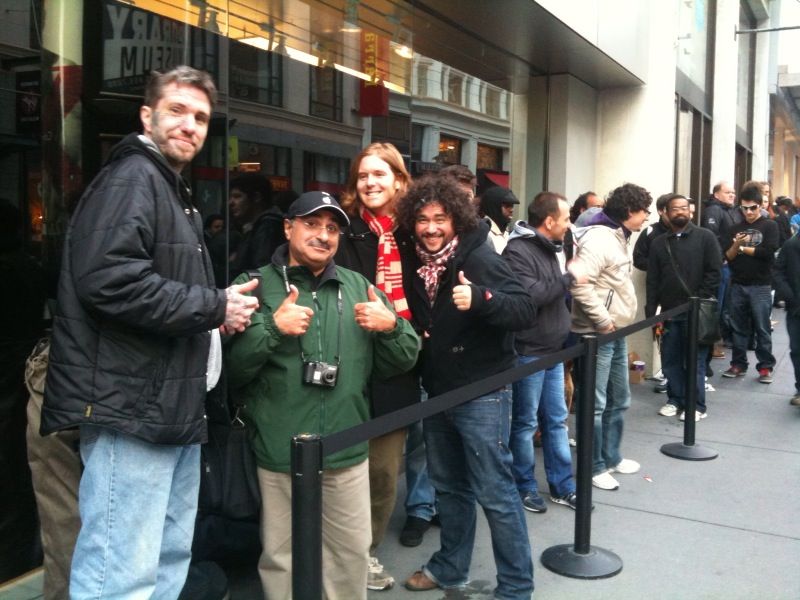 We're it!! Just got interviewed by NY Times! Hopefully he will include me representing our beloved forum! 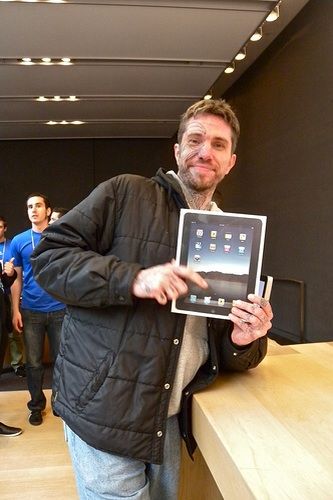 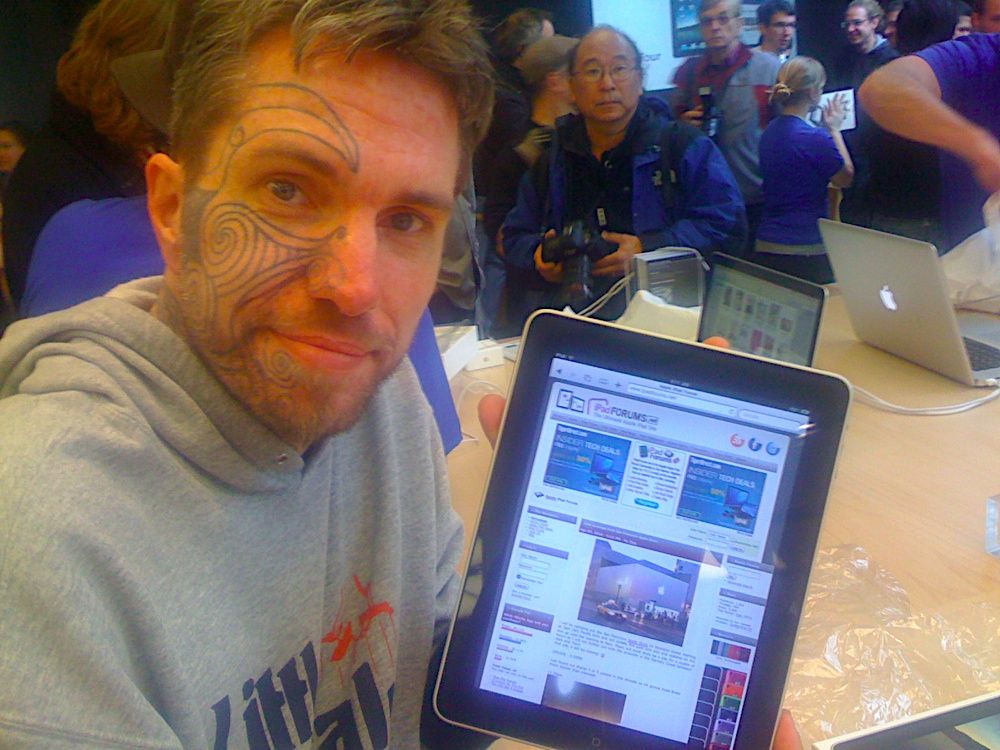 Im finally home...
Being first in line (with a reservation!) and first to enter the store, attracted alot of press from all over the states and the world, Im supposed to expect calls from Associated Press, SF Chronicle, NY Times, The Asian Shimbun (Japans main newspaper) later on today and for the next couple of days!
Im very tired, my hands and knees are swollen from lack of sleep plus not using my waterbottle enough.
That was probably one of the craziest experiencies in my life, I got to meet Jony Ives who congratulated me (and me thanking him for all he have done!) Wasnt allowed to take pics with thou...

Its an awesome little machine and I think I might have won the Pacific Time zone case from CIMO.

Thank you all for following my little adventure in my corner of the world!
Last edited: Mar 27, 2011

Be sure to tell everyone about the forum here, it would be great to get some new people here. Wish I had some biz card templates done but I don't
OP

Might hangaround the store for a bit later in the day and reset the safari homepage on the ipads in the store to our forum....maybe! LOL

With a little luck I might be first in line and we'll get some media coverage aswell! That would rock!

You know - if you were to put a quickie intro doc together (b & w) - maybe two individual fliers to an 8x11 page - put the forum logo as well as what it's about -- then post as a high priority topic on the board early tonight -- I bet you could get some members to print off some sheets and hand them out at the Apple Store tomorrow. Just a suggestion.
D


You know - if you were to put a quickie intro doc together (b & w) - maybe two individual fliers to an 8x11 page - put the forum logo as well as what it's about -- then post as a high priority topic on the board early tonight -- I bet you could get some members to print off some sheets and hand them out at the Apple Store tomorrow. Just a suggestion.
Click to expand...

I plan to stop by the Best Buy after I receive my IPAD tomorrow, just to get some pointers. If you send the flyers, I will pass some out to the less fortunate persons standing in the line.

I am in Alexandria, Virginia.

Good luck Max! I wish I was getting mine tomorrow, but mine is coming later this month.

Stay warm. I hope it doesn't rain too much on you.
C

Good luck! Hope you can provide us with some pictures as it happens!

I just read on a local blog that both Austin locations will not allow you to line up outside before 7:00AM..

"Both Barton Creek Mall and The Domain have announced that no one will be allowed to line up outside the Apple Stores prior to 7:00 AM so go ahead and have that second cup of coffee."
S

At the Orlando Florida Mall at 7:15am Eastern, the line had 10 pre-orders and about 25-standby folks. Same thing here, Apple employees making tons of noise setting up the new display.

Trying to pass the word about ipadforums.net

So I'm actually the guy at the very front of the line. My friend wearing the blue jacket is the one getting an iPad 16GB WiFi model today, while I was simply his ride into town.

Originally, his iPod touch 3rd generation had been damaged several weeks ago, and he was in the market to replace it with another. However, after a few weeks of research and some discussion, he was convinced that he wanted a "larger" replacement, if you will. As such, I recommended the iPad to him as it's a viable alternative to the iPod touch and could almost literally be dubbed the "iPod touch XL."

As an IT journalist covering various aspects of the emerging tablet computing industry, I felt inclined to drive up to San Francisco this weekend and experience a proper launch of a potentially trendsetting portable device at the flagship store itself. While I may not be purchasing an iPad and have no intentions of purchasing the first-generation iteration, I am looking forward to this launch as much as any of the rest of the guys in line.

Here's to hoping for a timely, safe event with some great press coverage and analysis.

I am really torn, as much as I want to go stand in line I think I will wait a little while for the first wave to subside. They ran a piece on Fox2 Detroit this morning and they said that one of our four local stores had more Ipads than just the reserved units. That would be good because now that I have had plenty of time to obsess over this now I think I need at least 32g, instead of 16.

Morning Max and everyone else waiting in line

Good luck...that would give this forum great exposure. Keep us posted.

Max, that's so awesome, let us know if there is an internet stream of the interview anywhere!