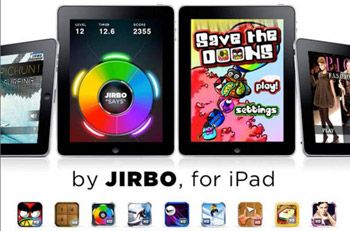 Social gaming company Jirbo has today said that its daily iPad downloads are already equal to its daily iPhone downloads, with users having downloaded over 100,000 iPad apps from Jirba since launch day. Jirba usually reckons to sell over one million iPhone/iPod touch app downloads per months, and the company is reporting that iPad-specific apps such as Doons, Paper Football, Break, Slider, Jirbo Says and Marble Mash are flying out of the iPad App Store. Hereâ€™s Jonathan Zweig, CEO of Jirbo, Inc, talking about Jirbo and the iPad:

â€œThanks in large part to our AdColony in-app video ad technology, which we will be opening up to developers this month, weâ€™ve been able to drive tremendous downloads of our applications, which users clearly love. We believe iPad is the social gaming pass-around platform of our generation and our titles are tailored to that notion.â€

â€œiPad will revolutionize portable computing much like iPhone and iPod touch did for mobile devices,â€ concurred Nikao Yang EVP of Business Development at Jirbo.

By Maura Sutton, iPad Forum
You must log in or register to reply here.