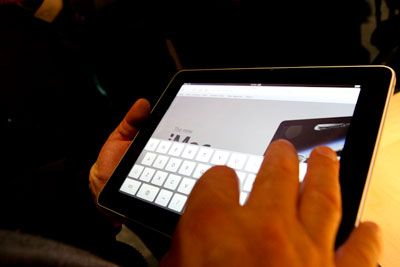 The launch of the iPad in nine new countries on May 28th has caused major excitement. The UK has been fully gripped by iPad fever, with Pocket Gamer reporting a carnival atmosphere at the Regent Street London Apple store, with British celebrity and Apple fanatic Stephen Fry in attendance, as well as the worldâ€™s tallest married couple, Wilco van-Kleef and Keisha Bolton, who were there to promote the Guiness World Records iPad app. According to BBC Technology reporter Jonathan Fildes, the store was besieged by a friendly crowd of hundreds of people who cheered every time a new iPad owner emerged. (You can hear that on the news video posted below. Itâ€™s hilarious!) The Associated Press also reported similar scenes of mass iPad excitement in Paris, Frankfurt and Tokyo. The Madrid Apple store sold out of their stock allocation in just hours.

As predicted, Currys and PC World stores around the country were also stocking the iPad, with their websites carrying a list of where you could go to get your iPad. At the time of writing, PC World and Currys both still have stocks of 10 or more iPads at most of their stores around the country, although the central London Tottenham Court Road store is sold out, and the Oxford Street and Canary Wharf Currys stores are also sold out. The way it stands at the moment though, if you want to just turn up and buy an iPad, you should be able to. Just donâ€™t tell anyone whoâ€™s still waiting for their pre-order!

Everyone raves about the "Elements" program that Fry mentions, which is $14 or so, iirc. Hard to believe its worth that much. Has anyone tried it?
You must log in or register to reply here.

Currys , PC World to Stock iPad at Launch in the UK

Mar 25, 2011
Cadena96
C
M
Mirrorâ€™s Edge for iPad Goes Free in Some Countries, but not the US Unfortunately