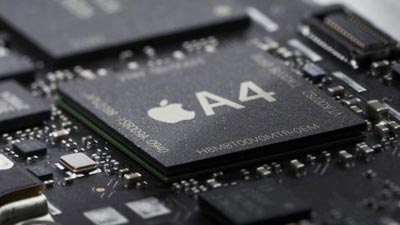 The brain inside the Apple iPad is a new processor that until yesterday has been unseen or unheard of. Introduced as the Apple A4, this new processor is a bundle of power running at 1GHz. The technology most likely came from the acquisition of PA Semi in 2008. According to Wiki:

P.A. Semi (originally "Palo Alto Semiconductor") was a fabless semiconductor company founded in Santa Clara, California in 2003 by Daniel W. Dobberpuhl (B.S. EE 1967 University of Illinois, Urbana-Champaign) who was the lead designer for the DEC Alpha 21064 and StrongARM processors. The company employed a 150-person engineering team which included people who have previously worked on processors like Itanium, Opteron and UltraSPARC. Apple Inc acquired P.A. Semi for $278 million in April 2008.
Click to expand...

We believe the A4 name is due to it's fourth generation spot in Apple's family of multi-touch devices. There is also a high probability we'll see this chip in the next generation iPhone (iPhone 4G) and iPod Touch. According to Wiki:

The system on a chip combines the CPU with an integrated graphics processing unit as well as other parts. The main processor is an ARM Cortex-A9 MPCore. The graphics processor design is likely to be a PowerVR SGX series 5 (the SGX545) core, plus a PowerVR VXD for video and audio playback, licensed from Imagination Technologies, which confirmed Apple was a licensee on 18th December 2009. The A4 is capable of running OpenGL ES 2.x applications and possibly OpenGL 3.2 and OpenCL 1.0 applications.
Click to expand...

The A4 processor is much faster then the current iPhone 3GS running at 600Mhz and iPod Touch. Speed isn't everything when designing a mobile chip though, power consumption is just as important. "The A4 chip is so power efficient that it helps iPad get up to 10 hours of battery life," according to Apple's iPad Web page.
You must log in or register to reply here.

Apple Tablet Specs Round Up

How much did Apple really pay to develop the A4?

New Rumors point to P.A. Semi Chip inside the iSlate

Inside the iPad: Apple's new 'A4' chip