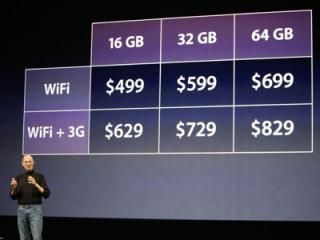 Since Apple announced the pricing for the iPad, I've been wondering what the actual part cost per unit is. Well, according to BroadPoint AmTech analyst Brian Marshall, the low-end $499 version of the new tablet costs about $270 in materials and manufacturing.

Marshall concluded the most expensive piece in the iPad's bill of materials (BOM) is the 9.7-inch touch-sensitive display, which he put at $100. Apple's most profitable item, meanwhile, is the 3G radio: Models carrying the unit cost $130 more than those without, while it only costs the company $16.

The total BOM for the 16GB WiFi-only iPad is $270.50, plus a $10 line item dedicated to manufacturing and another $20 set aside for warranty service costs. The 16GB of memory and the aluminum case are estimated to cost about $25 each, while the Apple A4 processor chip is put at $15.

Profitability appears to scale up as the lineup increases in capacity, since the 32GB and 64GB iPads only see their costs rise another $25.50 and $76.50, respectively, but their suggested prices go up $100 and $200.
Click to expand...

What's great for Apple is that the cost of goods will decrease with time and Apple (of course) can pick and choose wether to lower price or not. So, this could become even more of a money maker with time.
You must log in or register to reply here.

Is Apple looking to build a lower cost iPad mini?