iPad 3G Delayed Until May 7th in US 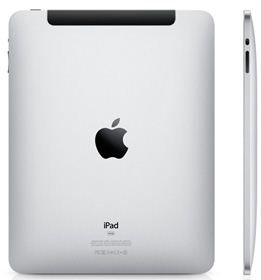 Multiple online sources, including the New York Times’ Gadgetwise blog, are reporting that new information has appeared today on the US Apple Online Store, denoting that the three 3G models will ship to customers “By May 7th”, which marks a slight delay from the end-of-April release date that was previously tagged to pre-orders.

Customers have a choice of two monthly data plans from AT&T – 250MB or unlimited. You can sign up for a contract-free data plan and change your service directly from your iPad if you so desire. AT&T data plans also include unlimited access to over 20,000 Wi-Fi hotspots at locations such as Starbucks and Barnes & Noble.

** Update, for those that pre-ordered the iPad 3G before today, you should still receive it by the end of the month according to recent emails sent out by Apple!
G

Boy, I just remember the Jedi mind-freak that I went through to get my wifi. looks like it's starting up again......

I believe the May 7th date is for people ordering an Ipad 3G today. I called Apple when I heard about the May 7th date and was told my pre-ordered ipad 3g 64gb would arrive at the end of April. They have enough to meet their pre-order commitment on time. I hope that is true!!!!
OP

Has anyone seen/heard a shipping date for the first batch of 3G orders? I wonder if Apple will do it on another Saturday?

I guess I just need to read before I ask
T

iDan said:
Has anyone seen/heard a shipping date for the first batch of 3G orders? I wonder if Apple will do it on another Saturday?

I guess I just need to read before I ask
Click to expand...


Did they really have to pick the very LAST day of April?

for those who pre-order soon enough from what I read their 3G iPad should arrive on the same day it's released, which of course has now been changed to April 30

Just checked my credit card and it looks like there is a temporary authorization for the iPad 3G I pre-ordered. Maybe they'll ship soon?

iDan said:
Has anyone seen/heard a shipping date for the first batch of 3G orders? I wonder if Apple will do it on another Saturday?

I guess I just need to read before I ask
Click to expand...


Did they really have to pick the very LAST day of April?

Technically it has always said 'ships late April' - and since they are probably shipping from China - something that starts shipping the 23rd to arrive on the 30th - that's within the time frame.

I just wish they would have advertised the date a month ago -- the guessing game was unnecessary.

I hope this is true. Please let us know if it really does arrive today. Hard to believe.
D

Called Apple about my ipad 3g they informed me that it was being shipped april 30th.

TomCat - you're they only poster I know that has a date like that to receive your 3G iPad. Are you sure you ordered a 3G? Are you related to Steve Jobs?

My mistake. Apparently my old eyes jumped a line. I took delivery of my 10W USB Power Adapter today. When checking the bank this morning I noted that Apple had blocked the money for the Ipad. I then went to order status and read the wrong line. I heard that Apple has announced delivery on April 30th. I guess this old man will just have to wait another week for Christmas.
T

I pre ordered two 3G 64GB iPads. Apple debited my checking account for them yesterday, 22 April. Empirically over the past month, I have noticed that when my checking account was debited for the power adaptor, wireless keyboards, and iPad docks, cases, etc. the item was shipped within two days after my checking account had been debited.
You must log in or register to reply here.

Steve Jobs Says iPad 3G Is Coming to Europe End of May, US End of April