iPad 3: What is the maximum speed you have achieved /can achieve over WiFi?

I'm curious as to what is the maximum speed you have achieved over WiFi. Is there a predetermined maximum WiFi speed the iPad 3 just can't go above?

I ask because I find it curious that on my laptop, which is about 3 months older than my iPad 3, I'm able to achieve 72mb download, twice the speed that on my iPad 3, which always maxes at 30mb.

I recently replaced my router, which almost tripled the max speed I was able to achieve on my laptop, which used to be a maximum of 25mb, but It had almost no effect on my iPad 3, which speed increased only by 5 mb for a maximum of 30mb.

Have any of you be able to achieve over 30mb on the ipad? Does anybody know what is the reason for this limitation? I always assumed that being my ipad 3 newer than my laptop, the wifi card would perform better but I see it is not the case.


Below I'll post a couple of pics, one of the speed test on my laptop performed at speedtest.net, and the other one, a screen capture of the same test on my ipad, using speedtest.net's iPhone app.


If anybody has any ideas as to why is there such a big discrepancy between the two, or if there is anything I can do to tweak the settings on the ipad 3 in order to improve the wifi performance, I'd appreciate it. 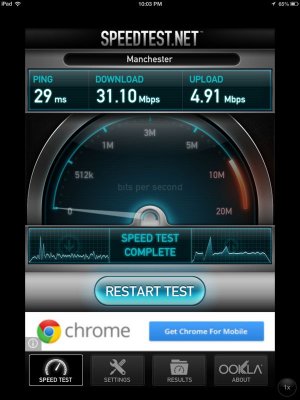 Wow, your results are almost identical to mine! I'm starting to believe no matter what your broadband speed is you will never reach more than 30 or 35 megs on the ipad. (My advertised speed is 75 megs but my desktop pc over ethernet always tests around 82)

iPad 3 has a weaker processor than most laptops. Also, the antenna environment is very different too.

30mbps is plenty for anything you need to do on an iPad. It could be capped just to ensure the CPU is not taxed too much so it can service other tasks.
OP

AQ_OC said:
iPad 3 has a weaker processor than most laptops. Also, the antenna environment is very different too.

30mbps is plenty for anything you need to do on an iPad. It could be capped just to ensure the CPU is not taxed too much so it can service other tasks.
Click to expand...

Interesting. That never occurred to me. The culprit being some cap set by apple as you say above makes a lot of sense.
You must log in or register to reply here.

C
What are the download speed capabilities of iPad 3?

D
Anyone Else Have This Problem?
2