iPad 3 rumored to be shipping from factories on Feb. 26, arriving in U.S. March 9th !

iPad 3 rumored to be shipping from factories on Feb. 26, arriving in U.S. March 9, available for pre-order sometime 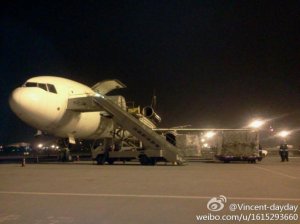 Photo of iPad 3 units being loaded on planes? (thanks @sonnydickson)

Adding to the mountain of iPad 3 rumors is word that shipments of Apple’s next generation tablet will be leaving Foxconn factories in China on February 26 for arrival in the U.S. on March 9.

Looks like there may be some components, including storage chips, being shipped as well, according to photos found by Sonny Dickson. iMore previously heard that Apple was planning their iPad 3 event for March 7 and BGR has reported that iOS 5.1 was scheduled for March 9.

Apple released the last 2 iPads on Fridays, so that’s consistent, however at 2 days it’s also a far shorter period of time than last year’s 9 days (announcement on March 2, launch on March 9). A GM version of iOS 5.1 hasn’t even been released to developers yet, let alone a version that supports additional features presumed to be coming with the iPad 3. If Apple releases the GM seed of iOS 5.1 at the iPad 3 event, we’d expect at least a week between that and final release, a couple days before the product launch.

Furthermore, 9to5Mac‘s Marc Gurman has heard there may be pre-orders for the iPad 3, which would also indicate a slightly longer timeline. While the iPad 2 didn’t have pre-orders, the iPhone 4S did (announcement on October 4, pre-orders on October 7, launch on October 14).

Gurman has also heard more talk of the iPad 2 sticking around at a lower price point.

Additionally, our sources are pointing to the discontinuation of all iPad 2 WiFi + 3G models and all iPad 2 WiFi-only models (except the black and white 16GB units – at least initially) when the iPad 3 launches. This would refute rumors of Apple launching the Retina Display-packing iPad 3 as an extension of the iPad 2 line, and would seem to back up rumors of Apple keeping the 16 GB iPad 2 around at a lower price point. This iPad 2 model discontinuation information is based on Apple product supply checks.
Last edited: Feb 26, 2012

Clenching down on my teeth... Can't wait any longer!! :banghead:
OP
A

exile said:
Clenching down on my teeth... Can't wait any longer!! :banghead:
Click to expand...

"Patience is the Virtue of all Good Things ! My Friend

timmypics said:
I bet we can get the japanese knock-offs of it before the actual product comes over. I can't wait!
Click to expand...

Never happened and will not happen

augustya said:
"Patience is the Virtue of all Good Things ! My Friend
Click to expand...


Ughh yeah I know
OP
A

col.bris said:
Never happened and will not happen
Click to expand...

I saw it on some website selling there is already a Chinese Copy of iPad-3 that is being sold and supposedly it has a Retina Display !!

augustya said:
"Patience is the Virtue of all Good Things ! My Friend
Click to expand...

Sent from my Verizon Black 64GB iPad 2 With IOS 5.01 Update From NYC using iPF
A

Thank you!!
Hope the airplane will arrive earlier!!
T

its only a matter of time now cant waite
OP
A

Oh Gawd... The insanity is starting in just a few weeks crazy long queues, people standing in queues like cattles

Considering an "alleged" price increase, recent iPad 2 sales from Christmas, do we really expect their to be long lines and sell outs of the iPad 2 like last year? GAWD, I hope not...
V

I am so tight that I just purchased this iPad 2 I wonder if I could take it back and get the 3
You must log in or register to reply here.

M
Apple Said to be Planning iPad 3 Launch Event in March, and â€œStrangeâ€ Event in Feb