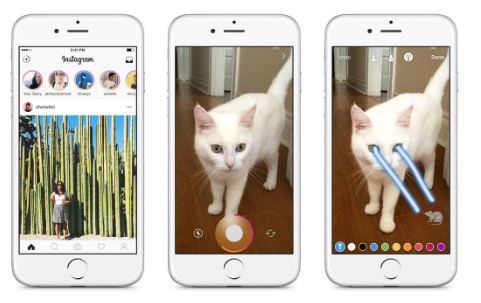 Instagram Stories, which is just rolling out to users from today, enables you to create “slideshows” that, just as with the Snapchat feature, disappear after 24 hours. And just as with Snapchat, you can decorate your images with all sorts of fun stuff such as doodles, emoji, and text.

Also, again, just as with Snapchat, it’s possible to keep tabs on who is watching your Story, and you can even hide Stories from particular users that you don’t want viewing them. On the default privacy setting any of your followers can view your Stories unless you hide them.

If your account is public, your Stories will be viewable to anyone who looks at your profile simply by tapping on your profile image.

While Snapchat Stories and Instagram Stories are both very similar, one major difference is that on Instagram you are only allowed to share photos that were taken in the last 24 hours. Snapchat users also have the option to share older photos via the recently introduced Memories feature.

“Stories are a new format that’s just starting to see broad adoption, and we’re excited to bring them to Instagram and help evolve them” an Instagram spokesperson told Mashable. “Over the years we’ve been really successful at bringing new formats to Instagram like video, messaging with Direct, and Boomerang.”
Click to expand...