How To Guide for Using VoiceOver in iOS 5.1

This How To guide is designed for those who are visually impaired, or those who know someone who is. It will show how they can enable the specific functions that Apple provide as standard to aid them in their use of their iPad.

VoiceOver provides a variety of functions to enable those who have limited or zero vision to be able to use their iPad. It will give descriptions of any area of the screen, speak as you type, allow you to choose options and functions and even connect to Braille devices. With the advent of iOS 5 everyone can enjoy using an iPad.

VoiceOver will tell you which orientation that your iPad is in, it will also tell you if the rotation of the screen is locked. It will announce when you go to a new screen then read the first item on that screen (normally the item or app at the top left of the screen.

To be able to quickly turn VoiceOver on and off the triple click home button function can be enabled....... 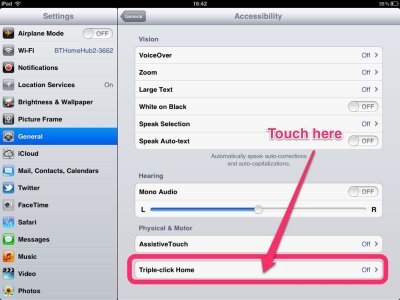 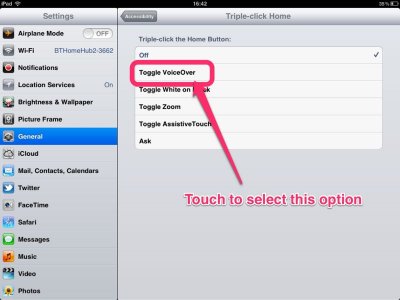 To enable theVoiceOver function we first have to open the the Settings App. By default the App will open on the General Tab. Then scroll down to the Accessibility tab on the right hand side.this will then open the menu containing VoiceOver......... 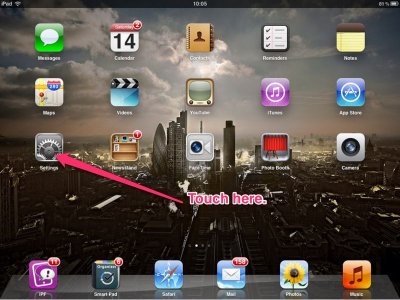 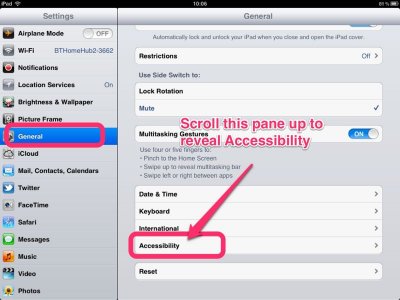 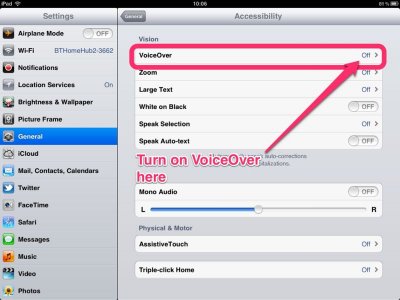 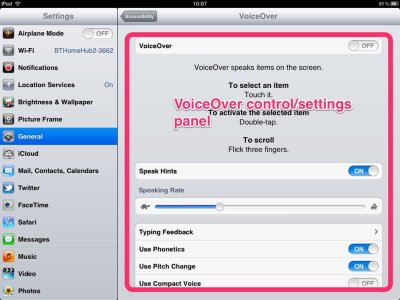 You should now have the VoiceOver control panel open. So it's time to turn it on, but before you do you'll need to learn a few things which are different to normal. Firstly not all the normal gestures will work, secondly, we have some new functions which are.....

Single Tap: a single tap anywhere on the screen will highlight that area and describe what is there, if it's text it will read the text and tell you if there is a function associated with it and how to operate it.

Double Tap: this will select the item, for example it will turn a function in settings from off to on.

Triple Tap: this will take you back to the home screen.

So, now turn VoiceOver on. The first time you do this you should see this screen which just warns you that gestures settings will change. 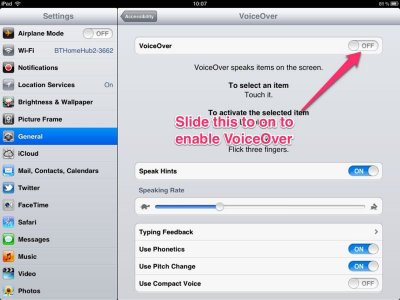 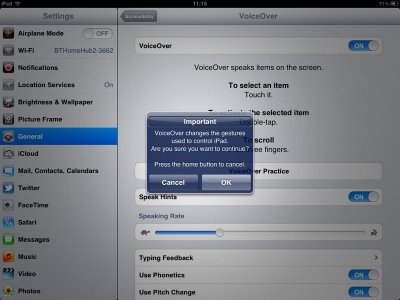 Your iPad should now be talking to you and describing anything that you touch on the screen. So let's look at a couple of the key settings, Speak Hints and the Speaking Rate controller for the iPads speech. (NOTE: you can mute/un-mute VoiceOver by double tapping the screen with three fingers.) 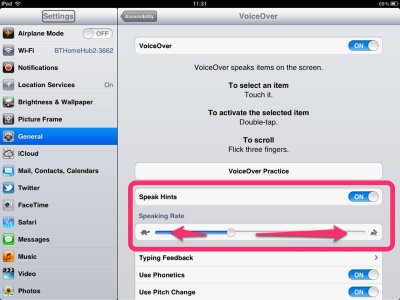 When Speak Hints is turned on it will also tell you if a function is available and if it is then it will tell you how to activate it. This function defaults to on and unless you are an experienced user it is probably best to leave it on.

Next we will look at Typing Feedback, by default this is set to both characters and words for both the software keyboard and hardware keyboards (it is not advisable to change these settings)...... 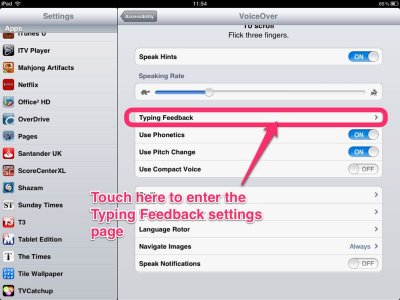 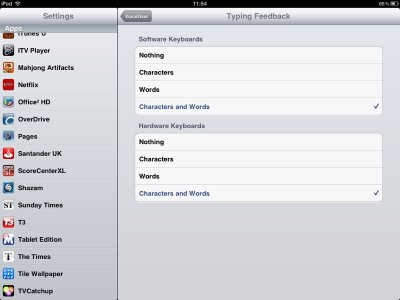 The next setting is Use Phonetics...... 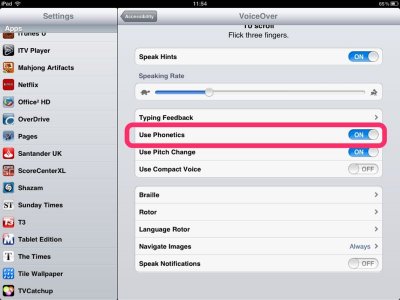 This setting works when typing, when switched on, instead of just speaking the letter being typed it will also speak the Phonetic Alphabet, for example, if you type the letter e, it will say "e" followed by "echo".

Now we will look at the Pitch Change function....... 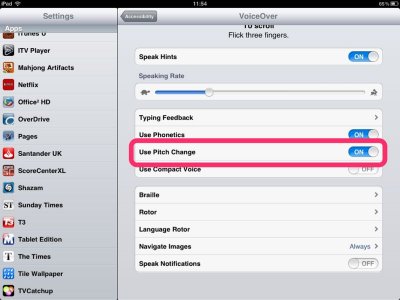 The Compact Voice function changes the reading voice. This setting is either off or on....... 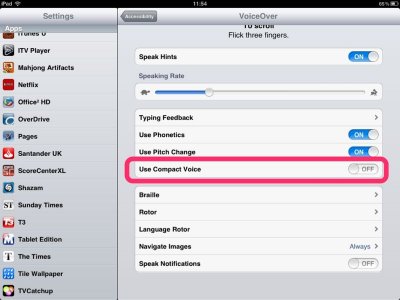 Next up is Braille. iOS 5.x.x has support for many external Bluetooth devices. For a complete list check out this link http://www.apple.com/accessibility/iphone/braille-display.html
The Braille settings can be found here....... 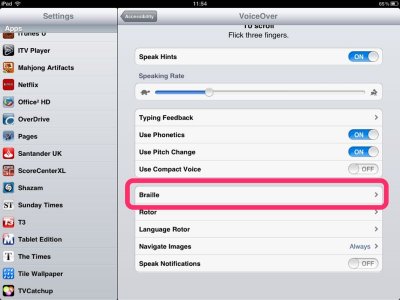 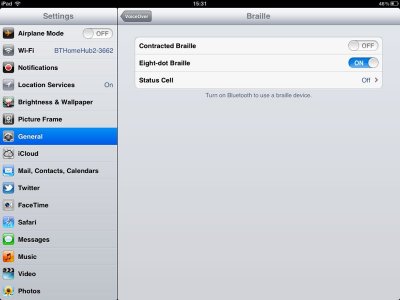 The Rotor control is an amazing little secret of iOS VoiceOver. It is a virtual dial which can change the function and results of the up/down flick gestures (described further on in this guide). To use the Rotor control, place two fingers on the screen and rotate one finger around the other, the dial will appear and as you rotate different options will appear on the dial....... 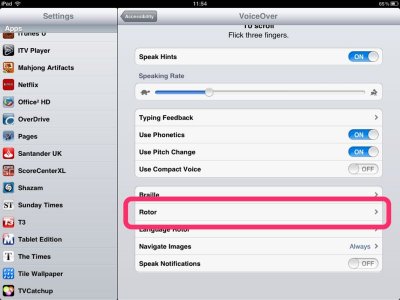 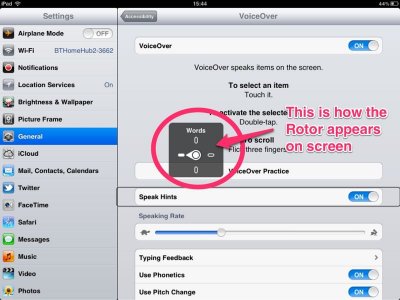 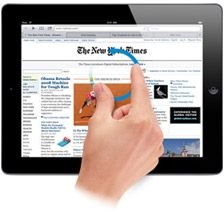 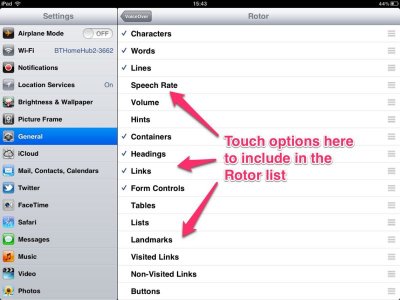 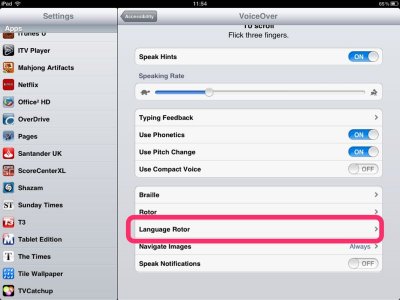 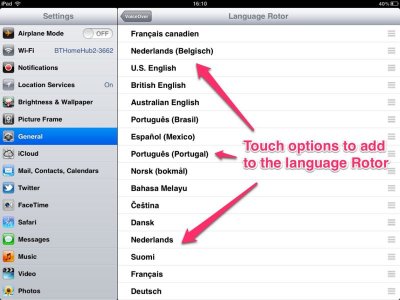 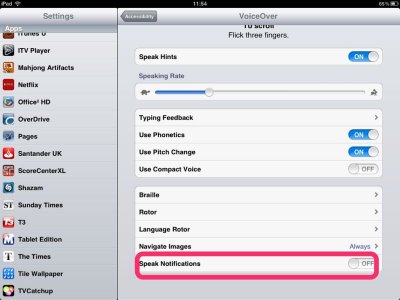 In the next posts I will add the list of commands and options which are available in iOS for the VoiceOver function.

This is really the tip of the iceberg for what can be achieved using the VoiceOver function. For indepth reading on this you can download the iPad User Guide For iOS 5.1 in the iBooks Store and search for VoiceOver. The guide is completely free and should be required reading for new users of iPads.

NOTE: For those with limited vision it is worth noting that VoiceOver and Zoom functions cannot be used at the same time.

TIP!: Up and down flicking (when enabled in Rotor) - The effect of the rotor depends on what you&rsquo;re doing. When you read text in an email, you can use the rotor to switch between hearing text spoken word-by-word, character-by-character, or line-by-line when you flick up or down. When you browse a webpage, you can use the rotor setting to hear all the text (either word-by-word or character-by-character), or to jump from one element to another of a certain type, such as headers or links. (this paragraph is copied from the IPad User Guide For iOS 5.1 available for free in the iBooks store).

TIP!: If you want to choose an item by name rather than search around the screen you can triple tap the screen with two finger which will bring up a search box and you can type in the item name.

TIP!: So you want to hear your battery strength or wifi signal strength, it's almost too easy, tap the very top of the screen and your iPad will tell you!

TIP!: So you want to revert to normal gestures whilst using VoiceOver, you can do that too! Double tap and hold the screen, the iPad will make a noise to inform you that normal gestures are in use, they will remain in use until you remove your finger.

Navigating:
Select and hear text by:

Using a control:
Select and hear values by:

Character, word, or line
Adjust the value of the control object

Read all, starting from the current position
VO-A

Read from the top
VO-B

Move to the status bar
VO-M

Turn the screen curtain on or off
VO-Shift-S

Return to the previous screen, or turn off VoiceOver help
Escape

Quick Nav
Turn on Quick Nav to control VoiceOver using the arrow keys. Quick Nav is off by default.

Turn Quick Nav on or off
Left Arrow-Right Arrow

Select the next or previous item
Right Arrow or Left Arrow

&ldquo;Tap&rdquo; an item
Up Arrow-Down Arrow

Single-letter Quick Nav for the web
When you view a web page with Quick Nav enabled, you can use the following keys on the keyboard to navigate the page quickly. Typing the key moves to the next item of the indicated type. Hold the Shift key as you type the letter to move to the previous item.

M: Element of the same type

Gabriel1--Many, Many thanks for posting this very informative Tutorial with the use of the Skitch App.

This is extremely detailed with relevant links back to the Apple Website.

The Voice Over Settings is just amazing for those with visual impairments or that need Text-to-Speech help due to verbal and nonverbal limitations. I have yet to try all the settings out-the rotary setting is one that is very interesting.


Again Thank You-this will benefit many of our members here on how to use these wonderful settings!

What can I say here, this is brilliant and will help so many.

Why thank you ladies.

With VoiceOver on, when I double-tap the screen wit two fingers at any time and in any app, whatever item I was last playing in the Music app starts up. I double tap and it turns it off. Is this a feature of VoiceOver or is there something wrong?
K

THANK you soo much, skimonkey and gabriel1! I am buying an iPad for my mother, who at 72 has just been diagnosed with macular degeneration after suddenly losing the vision in her right eye. She has always been very active and independent and now is having a very difficult time, both logistically and emotionally, with EVERYTHING, and I am sure that the iPad's voice capacities will aid her immensely. And your posts will aid ME immensely in setting up her iPad so that she can use it!! Thank you, once again. This forum is truly a godsend!!
OP

Thank you, that is so good to hear.

I'll check out the differences between iOS 5 and iOS 6 and update if required.

You are so very welcome, Karina!

We are here for you anytime should you need help! Please let us know how your mom is as well.
You must log in or register to reply here.

Make Any iBook Into An Audiobook For Free On iPhone, iPod Touch, & iPad