Greenpeace Targets Cloud Computing Devices Such as the iPad 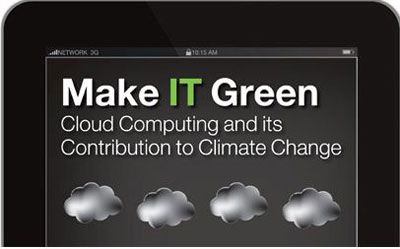 The launch of the iPad this weekend is such massive news that everyone seems to be using it as the latest buzz word to draw attention to their message, no matter the relevancy. Iâ€™m even thinking about writing an academic paper blaming the iPad for the cancellation of 24 (although the fact that the current series is really awful probably has more to do with it). Greenpeace are the latest special interest group of note the get in on the act, using the iPad to have a bit of a moan about the effect of cloud computing on the environment.

Although they take great pains to stress on their site that they are not â€œpickingâ€ on Apple or the iPad, it would appear that the naughty little device, just by dint of being a cloud computing platform, contributes to a great big carbon footprint. Tsk. Theyâ€™ve even got a big old report on the whole issue, called â€œMake IT Green: Cloud Computing and its Contribution to Climate Changeâ€. Apparently itâ€™s the fault of all those pesky Data Centers, Web Servers and so on. Theyâ€™ve got a diagram that explains it all on the website for you to check out.

So, I hope youâ€™re all feeling really guilty when you unwrap those shiny new iPads this weekend! Anyone going to be cancelling their order?!

Is this crazy or what??? If I use an iPad instead of firing up my desktop with its printer and scanner and the 3 hard drives in it I am using more energy???? Or maybe they want to go back to drums and mirrors.

ouch, Id better break my habit of flushing qtips down the toilet before they come up with a diagram about that too...
G

Instead of trying to cut other people and organizations down, Greenpeace needs to get back to planting a tree where one will grow and ask a friend to be responsible in their own sphere. Today they are a huge corporate organization with massive budgets and a political agenda longer than my arm. What happened to them being a calm voice in a storm of corruption? Now they are as militant and radical as the people they first set out to educate about what is better for the planet.
You must log in or register to reply here.

Four Security Tips for your iPad
2 3