Games Make Up 44 Percent of iPad Apps Tested So Far 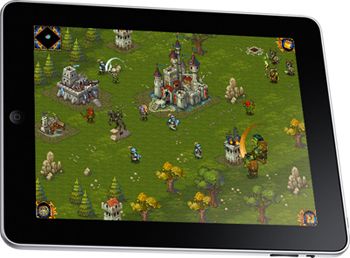 AppleInsider is reporting today that according to statistics provided by analytics firm Flurry, 44 percent of the apps being tested on the iPad are games, such as Majesty (pictured), which was one of the very first iPad games to be announced on January 29th 2010. Entertainment is the next most-tested type of app, at 14 percent, with books bringing up the rear at 3 percent.

Flurry has noted that since the iPad launch announcement, developer interest in Appleâ€™s iTunes App Store has almost tripled, with the figures showing that games developers have the most interest of all.

Few could have predicted the massive impact that the iPhone would have on gaming, and itâ€™s starting to look now as if the iPad will have a similar effect. Hereâ€™s Alexey Sazonov, Sales and Marketing Director at HeroCraft, makers of Majesty, commenting on whatâ€™s got HeroCraft so excited about the iPad as a gaming platform:

We believe it will provide the ideal platform for gaming, filling the gap between traditional desktop and mobile phone devices. Coming from a strong PC background, Majesty will work tremendously well on a high-resolution portable device like the iPad.
Click to expand...

Although currently I use my PS3 to feed my gaming thirst...I have to admit I am super curious to see what will be offered.

I can see now I will have a mass of apps & much like people display their "friends" list on Facebook...I'm certain we will define our personalities by what Apps we have!