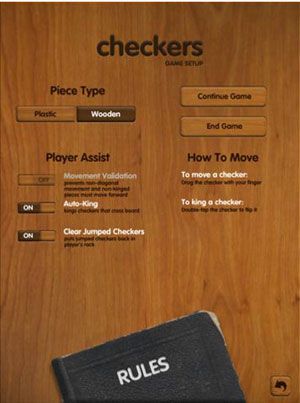 Metaversal Studios has today announced what looks like a really cool iPad app for fans of board games, and itâ€™s free too, at least the introductory version is! The app is called GameRoom, and is basically a virtual board games compendium, which provides all the â€œpiecesâ€ and â€œboardsâ€ for the featured games. Players sit around the iPad just as they would sit around a traditional game board. What makes GameRoom a cut above some of the other board game apps in the App Store is the fact that it also provides rules and assistance, although players also have the option to disable â€œplayer assistâ€ at any time and play by their own rules.

This introductory version of the app features two games, Checkers and Reversi, as well as a Custom game mode, which lets players customise the board and pieces for any grid-based game of up-to-12x12 squares using checkers. Lead Game Designer Jay Laird says, â€œWe want to enable players to play games their way, and we want to teach players new games that they may have never tried. We also want to bring back the real-life socializing aspect of social gaming by bringing people together around a single device.â€
The company also plans to release new rules sets, boards, and pieces with each subsequent update, with the next update due to include a Go board and rule set.

You can download the free app here: GameRoom for iPhone, iPod touch, and iPad on the iTunes App Store


by Maura Sutton, iPadForums.net
You must log in or register to reply here.