Fortnite for iOS Made More Than $1.5 Million in In-App Purchases in its First 3 Days 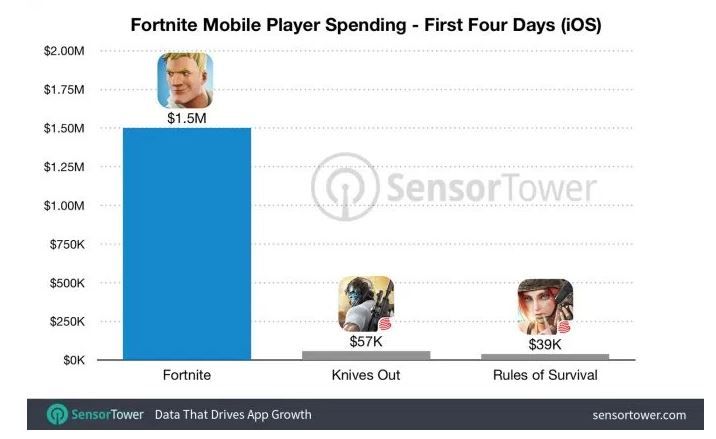 According to new figures from Sensor Tower, via 9to5 Mac, Epic Games’ battle royale smash hit console and PC game Fortnite, which was released on iOS last week, has made more than $1.5 million in in-app purchases to date.

Sensor Tower says that according to its own intelligence data, $1 million of that total was earned within the first 72 hours.

This means that Fortnite is currently the most successful mobile survival game to date by a huge margin, with Knives Out making $57,000 in its first 4 days, and Rules of Survival making $39,000. However, with PUBG Mobile being released yesterday, the forerunner to Fortnite, those figures could be overtaken very soon.

At the present time, Fortnite is still invite-only, so the figures would surely be even bigger if Fortnite was available to all who currently want to play it.

To compare the success of Fortnite with other massively popular mobile games, Pokémon Go made $4.9 million in its first 4 days, and Clash Royale made $4.6 million. Will PUBG top even this.

Source: Fortnite for iOS generated over $1M of in-app purchases during first 3 days on the App Store
You must log in or register to reply here.