Similar in function to AirStash, the newly announced Kingston "Mobi SX" is a WEP-secured wireless storage device that allows up to three people to store and then stream media files.

Comment Print
Kingston this week at CES showed PC Advisor an Apple iPad accessory that dramatically increases the storage capabilites of Apple's tablet PC. The 'Mobi SX' is a WEP-secured wireless storage device that allows up to three people to store and then stream media files.

'Mobi SX' is the code name for a device Kingston claims will be available in the second quarter of 2011. Using 802.11a/b/g/n wireless, the 'Mobi SX' will come in 16GB and 32GB capacities, and will work with any Apple iOS device. It is a good-looking device, with the shiny black finish of an Apple iPhone.
Click to expand...

The MobiSX was shown off to a lucky few behind closed doors at CES in Las Vegas yesterday – essentially they’ve have created a flash storage drive with Wi-Fi built in so you can hook it up to all your Apple gizmos. 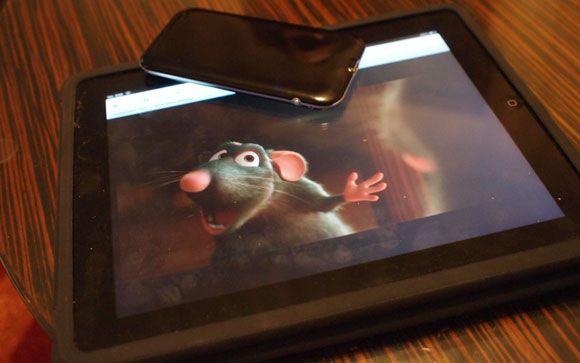 All you have to do it fire up your iPad, go to your Safari browser, tap in its IP address and you’ll be greeted with a file manager. From there you’ll be able access documents, photos, movies and music.

According to early reports, movies streamed direct from the MobiSX take just a couple of seconds to spring to life on the iPad’s screen, and up to three people can stream from a MobiSX simultaneously.

Battery life tops out at four hours constant streaming, or six in standby waiting for iPads, iPhones, iPod touches or laptops to connect.

What were looking at here is the first way to relieve storage anxiety as you won’t ever run out of space, and this is becoming more and more of a problem, especially with the inflating size of apps that are hitting the app store recently – we recently installed FIFA 11 on our iPad to be shocked that it was over a 1 gig.

And the icing on the wireless cake: Kingston has stated that this space saving solution will set you back $100 for a 16GB model, allowing you to double the space of the smalled iPad without having to remortgage your house.
Click to expand...

I will definitely be getting this or the AirStash when they are available.

I still prefer my AirStash. Since it uses SD cards, it's more flexible about storage size, and you can swap cards at a whim; I currently use two 32GB cards with mine giving me access to 128GB of storage total. I wish 64GB cards were cheaper...
R


Currently, yes on the AirStash. By the end of the month, Wearable Inc. will supposedly offer an upgrade that will let WebDAV-compatible software like QuickOffice to save files to the AirStash in the same way they let you save to DropBox and MobileMe.

To all those who say Ipad has no expandable memory...I offer this article and post.

xD
You must log in or register to reply here.

A
Hard Drive for iPad 2

D
What Hard Drive For Streaming Media To iPad 2