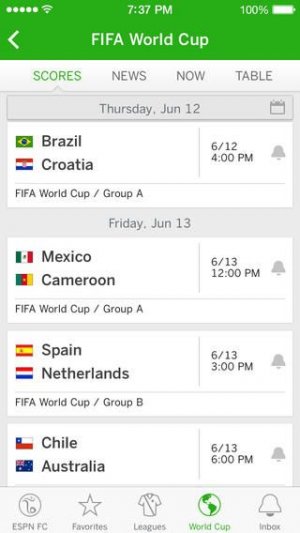 ​
The 2014 FIFA World Cup takes place in Brazil from June 12 through July 13 and if youâ€™re looking to follow the tournament from your iPhone or iPad, now thereâ€™s a really good app for that. ESPN, which is also the exclusive FIFA U.S. broadcaster, has released updated its ESPN FC Soccer app with complete coverage of the upcoming World Cup tournament. The app has been optimized for the iPhone, but it should work with your iPad, as well, as it says in the description that it is compatible.

Â· As the exclusive FIFA Official U.S. Broadcaster, the ESPN FC app will have live match video highlights. Watch goals and key plays from the app moments after the action
Â· Reaction and analysis on the ground in Brazil from authorities such as Gabriele Marcotti, Sid Lowe, Jeff Carlisle, Roger Bennett, Raphael Honigstein, Tim Vickery Fernando Duarte and Men in Blazers.
Â· In-depth reports on the U.S., Mexico, Brazil, England, Germany, Spain and other national teams.
Click to expand...

Soccer fans will be able to follow full-time and exclusive in-game highlights, breaking news and analysis, as well as ESPNâ€™s comprehensive coverage of all the major club leagues with videos, highlights, news, opinion and personalized reports. As expected, there wonâ€™t be any live streaming through this app, as you probably need to make use of the app provided by your pay-TV channel, if there are some.


The user interface follows Appleâ€™s iOS 7 style guide, which means it looks pretty elegant. The app comes as a 17.2MB download and requires iOS 7.0+ to run. Are you a soccer fan and if so, who do you think is going to win the World Cup?


Source: iPhoneForums
You must log in or register to reply here.