Disney Animated is the best iPad app of 2013, according to Apple 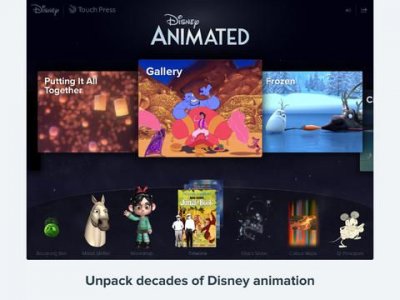 Almost ten days ago, we shared with you the news that Apple had published the list with the best apps of 2013 from various categories. Now, we want to turn your attention to Disney Animated, which has been selected as the best iPad app of the soon to end 2013 year.

It is the first time that Disney has been awarded this title, being selected out of the 100,000 iPad apps launching on the App Store in 2013. To put it briefly, the app is basically an animated toolbox featuring decades of Disney art.

The app represents a joint project of Disney Interactive, Walt Disney Animation Studios, and developer Touch Press and is considered a â€œpremiumâ€ iPad app, provided that you have to pay $9.99 to get it. By using the app, Disney fans will have access to animated character assets including text, art, sound, images, interviews, and interactive activities. Many of the digital assets were previously unavailable to the public and represent exclusive content.

Source: Disney Animated on iTunes
You must log in or register to reply here.