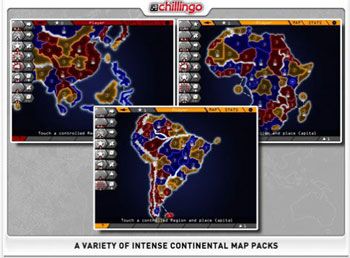 Chillingo is another one of the major games publishers that has taken the opportunity of the iPadâ€™s launch in nine new countries on Friday May 28th to release a new game and update some of its popular titles. The new game is Dominion HD, which is a tactical, risk-taking, turn-based world-domination game from developers Dot Matrix Interactive Design, in which players get to conquer their enemies in a bid to achieve world domination. The gameplay is of the classic variety, but there are plenty of modern twists to enjoy as well. Local and online multiplayer options including rankings, asynchronous turns against competitors, and the ability to have multiple games active at one time. You can download the game from the Apple iPad App Store for Â£2.99/$4.99.

Other Chillingo iPad games that have been updated include Ice Age Deluxe: Dawn of the Dinosaurs, which features a new world, Dinosaur Dusk, and Puzzler World XL, which has new puzzles, plus a special British version with British-style crosswords and words. Cup of tea anyone?

By Maura Sutton iPad Forums.net
Source: Chillingo
You must log in or register to reply here.