The app, or a calendar in the app?

If the second, make sure you calendar is not hidden (has a check mark next to it). 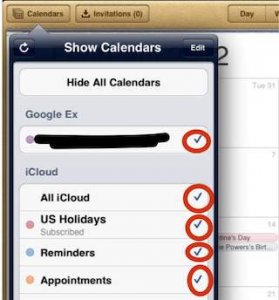 Are you syncing your calendar with a computer or online service?

Go ahead and try these general fixes; but if your answer to the two questions are no, then the calendar is probably not recoverable.

When you have problems with an app it's a good idea to clear it from RAM.

Close/Clear the app: With the problem app closed, double tap on the Home button to get the multitask bar. Tap and hold on any icon in the bar until they jiggle, then tap the minus sign on the problem app. This will remove it from RAM and insure a clean start the next time you launch the app.

If that does not work try a restart,

and then a reset if that does not work.

Reset: Hold down the power and home buttons until the Apple logo appears. The iPad will reboot. This usually takes a bit longer than a restart.
Last edited: Feb 10, 2012
You must log in or register to reply here.